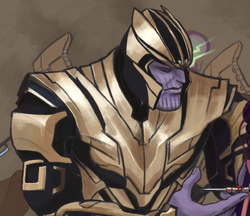 The Dark Lord, King Thanos, The Seeker of Infinity
Identity

Try as you might, you cannot stand in the way of destiny. It always has its way. Believe me... I know.

Thanos was born to Titanian Ambassador, A'Lars, and his wife Sui-San, who was traumatized at the sight of her baby. After trying to kill him moments after his birth, she was locked away in an asylum, where she later committed suicide. Thanos was then raised by his distant father, and was an outcast among his fellow Titans. As a teenager, he became obsessed with death and began killing animals to dissect them and learn how things work. As he reached adulthood, he graduated from animals to killing his fellow Titans, wishing to understand the meaning of life, believing he could only discover it through death.

Eventually, his father discovered his devious activities and tried to have him arrested. Thanos resisted and killed his father before escaping into the stars. From there, he joined a group of inter-galactic pirates who made their riches by pillaging planets across the universe. After being a part of countless massacres, Thanos rose to the top of his crew, which he dubbed "The Black Order", and developed a desire to create his own meaning of life; obtaining power by any means necessary.

As the Black Order continued to wreak havoc across the galaxy, Thanos was eventually met with the Goddess of Death, Hela, who had become enamored with him due to his many contributions to her kingdom. The two quickly fell in love and hatched a plan to obtain infinite power by collecting all six of the fabled Infinity Stones.

Thanos's devotion to Hela led to him executing his fellow pirates, instead opting to form multiple militias acting under his command, including the Sakaaran Shadow People, the Chitauri, and the Outriders. However, as he continued his journey across the galaxy, he came to grow fond of the younglings in the species he eradicated. This led to him adopting daughters from multiple different worlds, including Nebula, Proxima, and his favorite daughter of all, Gamora.

As time went by and Thanos continued to expand his empire, he also went on to reopen membership into the Black Order, as he missed having people close to him that he could trust, but also who would respect and fear him. This led to the recruitment of the trio of space pirates Cull Obsidian, Ebony Maw, and Corvus Glaive, who would go on to marry Thanos's daughter, Proxima.

Thanos and the Black Order eventually came to be known as the deadliest army in the galaxy, opposing the likes of the Nova Corps and others who would keep peace, such as the Shi'ar Empire and the Asgardians. As word of his power spread across the stars, he made enemies with multiple groups of heroes, including the Guardians of the Galaxy and the Avengers, the latter of whom discovered a prophecy of the future that foretold Thanos collecting all six Infinity Stones and going on the rule the entire galaxy. Since discovering this, Thanos has dedicated everything the Black Order has to opposing the Avengers and making sure this future comes to pass.

Over the years, Thanos was able to collect five out the six Infinity Stones, with only Time eluding him. After an elaborate trick played by Loki, the Stones were each stolen from him, and distributed to his enemies capable of wielding them; Time had been in Loki's hands. Soul went to Star-Lord due to his connection to Gamora, who Thanos had sacrificed for it. Power was wielded by Captain Marvel, Reality by Scarlet Witch, each Avengers who had been personally slighted by Thanos. Space was taken by the Cosmic Ghost Rider, who finally came to his senses and opted to betray Thanos. Lastly, the Space Stone was given to Franklin Richards, whose very existence defied the Prophecy of Infinity. Thanos put up a fight, but in the end fell to their combined might, his future filled with victory never coming to pass.

[[Category: In a Relationship with Hela Characters]]

Retrieved from "https://marvelcomicsfanon.fandom.com/wiki/Thanos_(Earth-101)?oldid=250828"
Community content is available under CC-BY-SA unless otherwise noted.