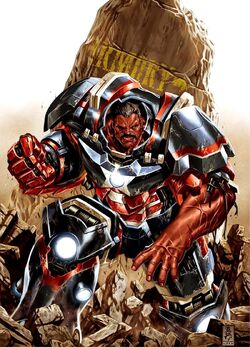 Earth-61615
Base Of Operations
Mobile across the United States of America, usually at The Pentagon
Characteristics
Gender

As consequences usually go, Mister President... Those outlawed punks will never know what hit them...

Thaddeus Elder Ross, known by his notorious nickname of "Thunderbolt Ross," is the former Lieutenant General of the United States Army who would eventually become the Secretary of State for the 45th United States President, Matthew Ellis. During his career, he was put in charge of their military project called the Bio-Tech Force Enhancement Project, with Ross' main aim being to find ways to recreate the Super Soldier Serum of the legendary Captain America in World War II. However, the experiment led to an accident which then transformed the scientist Bruce Banner into the monstrous, incredible Hulk. Ross was left with a badly broken arm following the incident, as well as a deep hatred of Banner, whom he blamed for the entire incident which had almost killed his daughter Betty, whom unfortunately was romantically-involved with Banner even after the incident despite Ross' great grudge against the scientist. Ever since the lab incident changed their lives, Ross' growing anger would only fuel his motivation to keep the hunt for the Hulk even after the latter had escaped the American border, despite Betty's continuous pleas for him to leave Banner alone.

Fearful of the damage that Hulk could inflict, Banner would become a fugitive and something of a pariah, and even had chosen to live a discreet life in remote parts of the world, working to cure the sick and help the poor while trying to elude those who would take advantage of his ability to change into the enormous green menace. After a long hunt, Banner was captured by Ross and his armed forces, only for Ross' subordinate officer Emil Blonsky to use all their experiments to transform into the terrifyingly monstrous Abomination.

However, when General Ross had sent a team of soldiers led by Emil Blonsky to apprehend Banner for their own intentions, he was then forced to return to New York City where he recruited the help of Betty Ross and Samuel Sterns to cure him of his own "curse." However, not long after this test was concluded, Blonsky himself had overdosed on Gamma Radiation and transformed into the Abomination, forcing a humiliated Ross to allow Banner to turn into Hulk and battle him in the borough Harlem before then allowing Hulk to escape into the unknown, away from authoritative captivity.

In the aftermath of the battle and the humiliating defeat for Ross, the General drowned all his sorrows and failures in a bar, drinking and smoking. In order to try and save his image from public humiliation, the World Security Council then informed S.H.I.E.L.D. that they wanted to make Emil Blonsky, who was currently in Ross' custody, part of the Avengers Initiative, blaming the Hulk for the Harlem incident and keeping Blonsky's reputation intact. Stark informed Ross that a team of superheroes was being put together by S.H.I.E.L.D., the very that appointed him to be their consultant. The talk ended up with Stark annoying Ross so much that Ross then refused to release Blonsky and tried to have Stark removed from the bar on that very night.

Due to the World Security Council's decision to let Banner worked alongside the heroic Avengers as an act of pardoning his crimes as the Hulk, Ross was displeased by this turn of events, but his newfound ally, S.H.I.E.L.D. Deputy Director Maria Hill, saw potential in what had happened in the aftermath of Ultimate War and thus leading convinced Ross, Doctor Leonard Samson, and later Tony Stark, to momentarily restart the Bio-Tech Force Enhancement Project in order to enhance a group of super-soldiers, which included already existing superheroes who were in favor of the Superhuman Registration Act, that would patriotically serve under the legal orders stated in the global registration act, and it just so happened that the former General Ross would be the perfect man to play the role of first test subject, since he was one of the most willing men who retained his personal grudge against the Hulk after all those years, especially since the green monster had gotten his daughter (who was also the woman whom Banner loves dearly) Betty, in grave danger for the second time after learning that she got in the crossfire between the heroic alliance and the villainous Movement across New York.

As part of the revived clandestine experimental project under Director Hill's authority, a sample of Samuel Sterns' gamma-mutated blood alongside a sample of Banner's blood as the Hulk, were used by S.H.I.E.L.D.'s scientist who were assigned with the Bio-Tech Force Enhancement Project, for Ross to try the experiment that created the previous gamma mutates, that being Sterns and Banner, one last time. After weeks of pain-suppressing treatments, Ross administered a modified version the Super-Soldier Serum. In the final treatment, Hill and Stark subjected Rogers to the super-soldier treatment, injecting him with the Super-Soldier Serum and dosing him with Gamma Rays while Ross was contained inside a suit-like chamber the size of Iron Man's Hulkbuster Armor.

Moments pass, Ross emerges from the chamber, transformed into a form similarly as the Hulk, only this time, his skin slowly turns into red upon his first reveal. Hill and most of the scientists were terrified by the "Red Hulk," finding this trait unexpected and somewhat believing it was an error during the experiment, although Stark finds it interesting and "accidentally creative." Upon quickly looking in the mirror, even Ross himself thought his transformation was uncannily what he would have imagined at first, describing the red in his monstrous form as the undying fiery flame that was fueling his hatred for Banner and the Hulk. Stark thought his observation as the Red Hulk was "poetic," sarcastically mocking Ross even at a moment of such somber and spectacular discovery.

In the midst of the experiment's success after transforming into the Red Hulk, Ross reverted into human form with little problems and optimistically confirms his consideration to join the forces of the Superhuman Registration Act's Initiative program, but at the agreement that the Hulk could only work with them in the field only if Ross deems it so, as he was given the position by the UN as the representative of having situational authority over the green monster. Much to Ross and Director Hill's surprise, Banner himself agreed to his terms after he and Stark found a convenient way to tweak the Extremis dose that he willingly injected in his body and unleash a new persona for the Hulk by retaining his intelligence and consciousness as Banner, something that would led to others calling the new Hulk persona, Doc Green. In agreement to Ross' demands, Doc Green preferred working with the S.H.I.E.L.D. scientist department, and would only be authorized in field, if and only if Ross orders him to work with them as a part Ross' act of misguided punishment against Banner.

The Superhuman Registration Act's purpose was to serve a "middle point" between every hero's desire to secure their local and global communities, promote world peace, and the international community's concern over the repercussions of the Avengers and the entirety of the Ultimates' actions. However, this decision had caused a deeply, scarring rift in the heroic community, with some backing the act while some others oppose it. This separation has ignited a great superhuman Civil War that pitted the two main sides, the pro-registration forces and the anti-registration insurgency, against each other which extremely tested their moral ideologies, beliefs, and overall responsibility as heroes, with the Anti-Registration questioning their freedoms and the right to choose as a righteous role of being a hero and sincere defender across the globe.

In days within the Civil War, Ross demanded S.H.I.E.L.D., under the legal jurisdiction of the United Nation superiors themselves, that he was in need of a group of operatives to assist him in their hunt for the heroic opposers registration. Luckily for Ross, Hill at the time was able to hold custody of a superhuman operative group and former criminals whom they dubbed as the "Thunderbolts." Much to Ross' amusement and impression from the operative heroes, everything he planned and expected as both the General and the Red Hulk were all set and in motion, prompting him to meet each and every members he was going to be leading in the battlefield across New York, hunting the Anti-Registration forces in plain sight. However, Ross was first advised by Hill and Stark into wearing a modified Hulkbuster version of the Iron Patriot Armor, which were made out of the same components as the large chamber Ross was encased in during his experimentation into the Red Hulk, much to Ross' annoyance that he had to comply with their proper instructions, otherwise the United Nations would strip him off his powers as the Red Hulk and his overall position working with S.H.I.E.L.D. and allegedly revert him back into retirement if he remains uncooperative.

Unbeknownst to everyone besides Captain America and his closest of allies within the illegitimate Anti-Registration organization, was semi-orchestrated by the mysterious terrorist Mark Gruler, who sought to exact revenge against the Avengers for his family's deaths during the Chitauri Invasion. On his plan trying to find and confront the true mastermind that has caused the war in the first place, Rogers tried to constantly convince Stark and his allies to help him, which included the Red Hulk and the temporarily-pardoned Thunderbolts, but the latter refused to listen, believing that Rogers was just having a hard time dealing to cope with the registration act, and the two factions engaged in a great chaotic fight across several locations throughout the country that resulted in overall mass destruction.

Gamma Radiation Physiology: Red Hulk will not transform between forms without consciously willing it. For example, when he was knocked out by Hulk, A-Bomb and Thor he did not revert for hours even though he was unconscious. Though he has sometimes changed back when asleep.

Same as a normal human being (as Thunderbolt Ross).

Retrieved from "https://marvelcomicsfanon.fandom.com/wiki/Thaddeus_Ross_(Earth-61615)?oldid=256617"
Community content is available under CC-BY-SA unless otherwise noted.