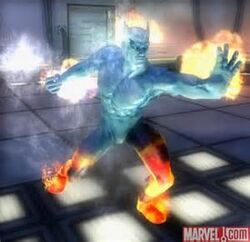 Little is known about Equinox's life before the Civil War. It can be assumed to be similar to his mainstream counterpart.

Equinox was one of the multiple unregistered meta humans that did not register or was in police captivity when the Superhuman Registration Act went into affect. As a result, he was considered a prime candidate for the Nanite program created by Reed Richards. When Nick Fury's squad was deployed to Prison 42 to stop the nanites from completing their agenda, Equinox was one of the first to be injected with a Nanite canister. While the squad attempted to recover the canister for study, the S.H.I.E.L.D. defenses prevented them from stopping Equinox's indoctrination, and he was released by the lead Nanite Control Officer Swanson, who sicced him on the squad. Equinox was defeated.

After he was defeated in the prison, he was one of the nanite controlled people to join The Fold, the collective mind of all the nanites. While his activities in detail are unknown at this point, he did further the agendas of the Fold as a tool, until the Alliance could stop them and defeat the assimilated Nick Fury, leading to the Fold's defeat.

Retrieved from "https://marvelcomicsfanon.fandom.com/wiki/Terrance_Sorenson_(Earth-6109.2)?oldid=128939"
Community content is available under CC-BY-SA unless otherwise noted.