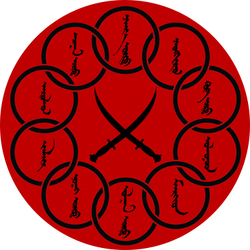 The Ten Rings was a terrorist organization in the Middle-East. Stark Industries' second in command, Obadiah Stane sold them weapons illegally to help them achieve their goals, and later made a deal with them: they would kidnap Stark Industries' CEO Tony Stark, force him to create a Jericho missile and them kill him, allowing Obadiah to take over the control of Stark Industries.

After weeks in captivity, Stark created a suit of armor powered by the new invention of a miniaturized arc reactor, rather than the weapon he was tasked to build, and successfully escaped. Stark subsequently designed and built a far more sophisticated suit after his return to the United States, and attacked various camps of the Ten Rings, destroying the stolen Stark Industries weapons.

Days later, the Ten Rings found the rest of the armor Stark used in his desert escape and informed Stane about it. Ten Rings' commander Raza proposed a deal with Obadiah Stane: he would give Stane the armor free of charge only if Stane supplied him with an army of iron soldiers. Obadiah refused, instead paralyzing Raza and taking the suit. Stane's men then executed the remaining Ten Rings soldiers.

When the experimental ship created by Justin Hammer for the U.S. Army crashed in Congo, soldiers of the Ten Rings-flagged Congolese Army tried to execute the pilot, only to be stopped by Iron Man.

Some time after the Battle of New York, the Mandarin sent video messages to TV Stations claiming to be the leader of the terrorist group. It was revealed that this Mandarin's activities were in fact a ruse conjured up by Aldrich Killian and A.I.M. to cover up failed Extremis test subjects, and the 'Mandarin' was really a drug-addicted, narcoleptic actor named Trevor Slattery.

Following the arrest of Slattery for aiding and abetting Killian's crimes, he was abducted from prison by Jackson Norriss, a man claiming to be a member of the real Ten Rings, who had been posing as a reporter. Norriss stated that there was a true Mandarin and that they were going to meet him.

Retrieved from "https://marvelcomicsfanon.fandom.com/wiki/Ten_Rings_(Earth-1010)?oldid=96726"
Community content is available under CC-BY-SA unless otherwise noted.