See also Siryn for a complete list of references to distinguish between these closely named or closely related articles. 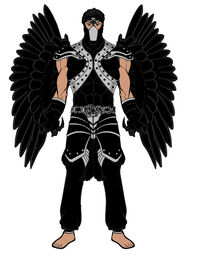 Teles Boltagon was born as the first son to the Attilanian Royal couple of King Cronus Boltagon and Queen Rhea Boltagon. From birth, Teles was intended for Countess Medusa Amaquelin in a pressured, socially, and politically arranged marriage. As the Crown Prince, Teles grew up acquiring a slightly haughty nature, avoiding most real responsibilities. This led to some somewhat minor clashes between his and Medusa's personalities early on in their relationship. Additionally, Teles looked up to Triton, who was two years older. They were best friends growing up and they got into all sorts of trouble together. Teles visited Triton after Triton's Terrigenesis; however, he never felt like he did as much as he could for his best friend.

Moreover, after Medusa accidentally caused the deaths of Stheno and one other Terrigenetic trainer, Teles was there to support her. He reminded her that Stheno and all the other Terrigenetic trainers knew the risks of their professions. Teles reassured her that Stheno wouldn't want her to live her life consumed with guilt, grief, or regret. Rather, Stheno would want her to hold her head up high and use her life to serve her people to the best of her abilities.

A year later, once Teles reached the age of 15, he underwent his Terrigenesis ceremony. Teles' Terrigenesis gave him great, yet uncontrollable gifts. As a result, King Cronus and the Genetic Council decided that Teles should be placed in isolation within a special chamber of the Terrigenetic Training compound. The chamber was designed to greatly dampen the effects of most non-physical Inhuman powers. Teles' stay in the chamber would be indefinite until he was able to master the rigorous mental training needed to prevent himself from uttering even the smallest sound, even while asleep. While Teles was in isolation, Medusa would come visit him each day. The two developed their own form of "Attilanian Sign Language" and grew further and further in love with each shared moment. Furthermore, Teles grew humbled by both his own circumstances and by Medusa's sense of duty, care, and kindness. Teles' Terrigenesis shocked him into reality that he must become disciplined and take responsibilities seriously. Additionally, Medusa's example caused Teles to want to mature and to learn about the needs of his people and his country.

Shortly after Crystal had been returned to Attilan, the Fantastic Four tracked Crystal and the Royal Guard back to the "lost city."

Retrieved from "https://marvelcomicsfanon.fandom.com/wiki/Teles_Boltagon_(Earth-515)?oldid=189245"
Community content is available under CC-BY-SA unless otherwise noted.