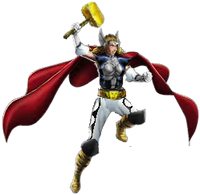 First appearance
When Else Fails...

In the beginning of time, alien sorcerer X'Hoss foretold the creation of the Designate, who would help evolve sentient beings to the next level of existence. Billions of years later, Tarene was born. She was told about the fate of the evil Destroyer and together with others sought a way to stop him. In the meantime, Thanos obtained X'Hoss' knowledge and destroyed Tarene's home-world. She gained the help of Thor and Orikal in defeating the villain.

Tarene later transformed herself into an Asgardian goddess and becomes Thor's loyal ally, taking the name "Thor Girl" and the civilian identity of Jake Olson's 'cousin' Tara. She tried to assist Thor in his adventures, joining him and Beta Ray Bill in the Thor Corps.

Tarene possesses god-like speed, reflexes, strength, and durability. She is effectively immortal and is immune to disease and hostile environments.

Has great skills in hand-to-hand combat

Retrieved from "https://marvelcomicsfanon.fandom.com/wiki/Tarene_(Earth-1010)?oldid=95185"
Community content is available under CC-BY-SA unless otherwise noted.