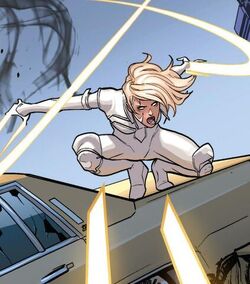 Earth-910392
Base Of Operations
The Outside
Characteristics
Gender

I did not sign up for this! I just want to go back to High School and be a normal kid...

Tandy Bowen and her boyfriend, Ty Johnson, were abducted after a car crash on their way to Prom. They were experimented on by Roxxon, and mutated into beings of pure light and dark, dubbed Cloak and Dagger. They went on the run for a short time, but Cloak eventually succumbed to his own powers and was absorbed into the Darkforce. Depressed and terrified, Dagger went on to join the Thunderbolts, a government-funded operation of superpowered criminals seeking redemption.

After working with the Thunderbolts for a few months, Dagger was recruited into the Renegades by The Outsider under the promise that if she returned to her home reality, her own powers would begin to evolve and claim the lives of several civilians in a blinding flash of light. Terrified of this prospect, Dagger agreed to join the Renegades, but only survived one mission, as she was killed by that reality's version of the Hulk.

Retrieved from "https://marvelcomicsfanon.fandom.com/wiki/Tandy_Bowen_(Earth-910392)?oldid=244636"
Community content is available under CC-BY-SA unless otherwise noted.