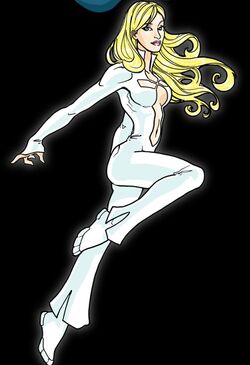 She's my light. She's all I have. Those drugs were the best and worse things we had. We use them to prevent similar mistakes in others, we "avenge" potential wrongs. Keep her safe, or see my at my worst.

Tandy Bowen and her twin brother Tyrone were born to Martha Johnson and Nathan Bowen. The twins were born mutants with uncanny light and darkness powers, respectively, that manifested at birth. In order to hide the powers of the children, they were constantly given the drug known as Banshee. After their parents had a messy divorce, their children were separated, with no recollection of each other.

Growing up wasn't easy, as both were raised by single parents with little money. Tandy in particular tried to make things better by finding a possible career path, but nothing worked, not even her loves of fighting and dancing. Soon she decided to run away, and in a New York City terminal, she found her twin Tyrone, also a runaway. As the two got to talking, they realized they vaguely remembered each other. The one thing they remembered doing together was taking Banshee. So they decided to steal some Banshee and relive old times, even though Tandy was hesitant. The extra dose of Banshee revived their mutant powers, instead of hiding them like it used to. They would use their powers to protect New York from the threat of crime (mostly drug-related), as the vigilante partners Cloak and Dagger.

Cloak and Dagger were very successful vigilantes, making several drug busts and cooperating with the cops. But soon, they were approached by Spider-Man. He wanted to recruit them into the Avengers. Cloak and Dagger refused, insisting that they were needed on the streets. Sadly, Spider-Man left, considering retiring the Avengers. But Tandy begged Cloak to reconsider, so they followed him back to his HQ, stating they had thought about it more, and they wanted to be Avengers. She suggested using an abandoned church for a headquarters that they had used as a base. After spiffying up the church, Cloak, Dagger, Spider-Man, and U.S.Agent became the official Avengers.

Light Knife Generation: Dagger can create knives of lifeforce that appear as light. When these are thrown, they can absorb the lifeforce of those they touch, killing them. These knives can also cure them of addictions (drugs, love, hypnosis, and infatuation or addiction). She can also solidify the knives and convert them into real metal knives.

Photokinesis: Dagger can create bursts of light, blinding enough to harm a human.

Illusion/Construct Creation: Dagger can create solid illusions out of her light, usually patterned after the nightmares Cloak can see.

Telepathy: Dagger has a telepathic link with Cloak, and can communicate with him telepathically.

Invisibility: Dagger can bend light around herself and others to become invisible.

Weapons Master: Dagger is skilled in the use of al bladed weapons, including her own.

Retrieved from "https://marvelcomicsfanon.fandom.com/wiki/Tandy_Bowen_(Earth-5)?oldid=59694"
Community content is available under CC-BY-SA unless otherwise noted.