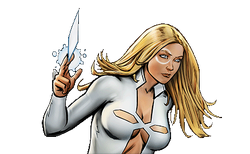 At some point, Cloak and Dagger were active in Colombia, destroying drugs plantation. They were approached by Professor X and they joined the X-Men in the Utopia Division.

Living Light Generation: Dagger generates a form of 'living light' which is actually lifeforce. She produces much more than normal humans do, but is usually conservative in the use of her powers. Overuse of her powers could be fatal. Dagger generates and stores this lifeforce energy automatically. If she goes for more than a week or so without using her powers she will become fevered and delirious, and eventually discharge her energy involuntarily.

Nonliving objects are unaffected by her daggers.

Equipment: None known.
Transportation: Teleports herself when needed.
Weapons: None known.

Retrieved from "https://marvelcomicsfanon.fandom.com/wiki/Tandy_Bowen_(Earth-1010)?oldid=217409"
Community content is available under CC-BY-SA unless otherwise noted.