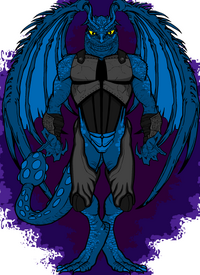 Someday the scientists who did this to me will pay, and Skrullos will become mine!

Like his brother Veris, Talon had the name of Taloris during his younger years and where he came from or who his parents are remains unknown. Between the two brothers he is the youngest and most often back then was trouble prone, being quick to anger and impatient much to his older brother's annoyance and dismay. Due to his trouble making, Taloris often felt nothing but violent backlash from Veris due to the older of the two not knowing how to properly handle his brother. It settled him down for a time but often the two bickered, yet also cared for one another due to the need to survive on the streets of Skrullos.

With also being K-Class birth Skrulls, the didn't get much help, if any during these hard times. Eventually though, Taloris's activities got the two brothers chased and caught by the Skrull Militia when they tried stealing some valuable items to sell for money. Imprisoned for this crime, the two were close to getting a sentence of remaining there for sometime until a Commanding officer took an interest in exploiting their abilities. Bargaining with the two, they eventually agreed to join the Skrull Militia where the two were put through brutal, rigorous training. But during those years the dynamic between the two drastically changed to a competitive one since both wanted to up their ranking far from where they had been when on the streets and not wanting to be a low ranking soldier.

Unfortunately, Taloris was not so fortunate to get this honor as he was taken at thirteen from the training. Where his brother would continue on in rankings, Taloris was put through multiple painful experiments, the science division testing his unique mutant genes to the point he became unrecognizable as a Skrull at all. Once he recovered, Taloris had to completely relearn his form and eventually came to serve as a tracker for the Skrulls while still receiving some military training so he could still be used as a fighter as well, but never interacting with is brother again.

A day eventually came though that Veris committed a crime Taloris was not aware of. One moment he was training and the next Veris was breaking him out of the Skrull palace, others in hot pursuit of the brothers. Though Taloris mused about the reverse roles Veris told him to promptly shut up and run, Taloris explaining what happened to him during their separation along the way and following the two high jacking a cargo ship to escape. Though Taloris tried to pry into what had happened Veris refused to speak and simply told them they were running. Caring little more to press for an answer, Taloris expressed a fact that if they were starting anew he would no longer go by Taloris, instead taking the new name of Talon to represent his more reptilian form, something Veris actually agreed was fitting.

For the next year the two brothers went from planet to planet, space station to space station conning people and stealing to get by. They largely remained on the run alone across the galaxy until they chanced meeting Hyacinth Calcite when they came across her escape ship. While his brother was immediately smitten with the feline alien, Talon was suspicious, finding her demeanor and flirtatious nature rather off and throwing up red flags. Despite his warnings however, Veris dismissed his brother's concerns and allowed Hyacinth to travel with them much to Talon's chagrin, which Hyacinth found amusing.

Eventually, the trio came across Earth and were taken into custody by SWORD to be interrogated, which took sometime before they were convinced they were not there for the empire as it had been before. Though skeptical, SWORD put the three in the care of the Avengers who enrolled them into the new Academy in the hopes that they could indeed be an asset to the Earth. But as a precaution, Talon was put on a different squad than his brother just in case their suspicions proved true.

Talon has great strength than any Skrull and maybe three times that of an average human.

Retrieved from "https://marvelcomicsfanon.fandom.com/wiki/Talon_(Earth-7194)?oldid=162184"
Community content is available under CC-BY-SA unless otherwise noted.