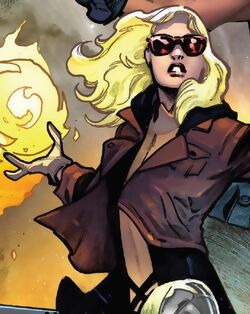 Get ready for the boom!

Growing up, Tabby Smith lived a fairly normal life. In High School she was a cheerleader, a party girl, and a bit of a control freak. She was able to get by on her looks so much so that no one ever really noticed her conniving nature. She could convince boys to do her homework for her, and the teachers to not care. The day after her graduation, she was attending a bonfire alongside her fellow popular students when, all of a sudden, a drunken football player began coming onto her a little too aggressively. She tried to push back against him, and only managed to succeed after somehow manifesting a miniature plasma ball, which exploded on contact with him, killing him instantly.

Everyone immediately freaked out, calling Tabby a monster and a freak, calling the police on her. She was too shocked to defend herself or fight back, but when she was en route to the police station in the backseat of a cop car, her path was intercepted by Magneto and his right hand man, Sabretooth. Tabby had heard of Magneto from the news, and was able to infer that his presence there meant she was a mutant.

She was scared, had been led to believe Magneto was a terrorist, but he was able to talk her down and convince her that she was given a gift, and if she went with him, she would be taught how to use it for the benefit of all mutantkind. Believing her life to be over and that she had nothing left to lose, Tabby accepted the offer.

From there, she has become a member of the Brotherhood of Mutants and a constant hell raiser for the human forces dedicated to bringing down mutants, as she consistently bombs MRD bases and anti-mutant rallies held by Senator Kelly, as well as other anti-mutant politicians. She was barely able to survive the devastation of Genosha by the Sentinel onslaught, thanks to defense from her teammate, Domino.

The two of them were able to escape and make it back to America safely, where they continued their mission of raising hell in the name of mutant supremacy. Eventually, they were reunited with Magneto and the other members of the Brotherhood, who opted to relocate to their base on Asteroid M, in order to escape from the Sentinels. Bombshell didn't like the idea of hiding, but she also wasn't too fond on the idea of dying, so she went along with Magneto's plan.