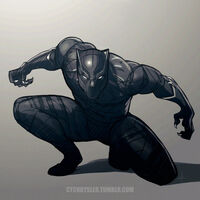 T'Challa Udaka was the second son of King T'Chaka and Queen N'Yami in 1997. From an early age, T'Challa was trained in Wakandan martial arts and went to a prestigious school. When T'Challa was eleven, his father was killed by Ulysses Klaue and his elder brother was made the new King of Wakanda.

When T'Challa was thirteen, he met Ororo Monroe a lower class citizen living in the slums of Wakanda, the two befriended each other and the two would begin dating a year later until she moved to the United States.

When T'Challa's brother travelled to New York for diplomatic reasons he took T'Challa along with him. While there, T'Challa went exploring Manhattan until he saw a god-like being in towering over the city, Galactus. He ran to check on his brother only to see the building he was in was destroyed.

T'Challa would recover his brother's dead body on mourn for him, he would then look over to Galactus and see that New York's heroes were helping fight Galactus and become inspired.

After Galactus' defeat, T'Challa never wanted to feel powerless as he did that day and not be able to protect the people he loved. T'Challa returned to Wakanda and was appointed King of Wakanda, after this he would train as hard as possible and wanted to participate in the Black Panther Trials, gain the abilities of the Black Panther and become a hero.

T'Challa would honor the title of Black Panther well, and the Wakandans would even believe T'Challa to be the best Black Panther in generations.

Seeking help from the X-Men

On a normal day, while T'Challa was tending to political business. Suddenly one of his guards report to him that there are intruders at the border. T'Challa suits up in his Panther Habit and goes out to intervene with the intruders.

Realizing he cannot defeat them alone, T'Challa swallows his pride and contacts the X-Men, the reason being because his ex-girlfriend Ororo Monroe belongs to the team and he trusts her. The X-Men then fly over to Wakanda to help, when they arrived T'Challa, as the Black Panther, would order his guards, who were acting hostile toward Ororo and the X-Men, off and welcome the X-Men to Wakanda. Black Panther would take them into the city and brief them on Klaw's partners and tell them that he had received intel detailing that Klaw and his mercenaries were planning on attacking the Royal City.

Before leaving, Ororo and T'Challa would privately talk about their previous relationship and she would apologize for leaving him as she had no choice, T'Challa would stop her and tell her she had nothing to apologize for as she was meant to be an X-Man and he was meant to be the king and protector, the Black Panther. The two would then share a passionate kiss before parting ways and initiating a long distance relationship.

T'Challa was given powers and enhancements by eating the heart shaped herb that is rewarded to a champion of the Black Panther Trials.

Black Panther Knowledge: T'Challa has the power to draw all the knowledge, strength, and every experience from every previous Black Panther.

Superhuman Acute Senses: T'Challa can see with greater clarity and greater distances than an ordinary human. His vision extends into the ultraviolet and infrared areas of the electromagnetic spectrum, allowing him to see in near-total darkness and retain the same level of clarity. T'Challa's hearing is similarly enhanced, enabling him to detect sounds normal humans can't and sounds they ordinarily could but at much greater distances. T'Challa can memorize tens of thousands of scents. His sense of smell enables him to recognize people/objects by scent, even if they are well hidden. He can track a target by scent and track them to the exact location, can smell fear, and detect if someone is lying by change in body odor. T'Challa's sense of taste is sensitive to the point that he is able to taste the exact ingredients of any particular food he is eating.

Superhuman Strength: T'Challa has received a blessing from the heart shaped herb, which elevated his strength to superhuman levels. His physical strength is between 800 lbs and 2 tons; although the full limits aren't known.

Superhuman Speed: T'Challa is able to run and move at speeds superior to those of any Olympic athlete, and is capable of reaching speeds of 40 mph. He has the ability to attack faster than the eye can follow. His combat speed seems more enhanced then anything else, as he has frequently kept up with other enemies in combat, and blitzed people before they pull their trigger fingers.

Superhuman Stamina: T'Challa's body eliminates the excessive build-up of fatigue-producing poisons in his muscles and his musculature generates considerably less fatigue toxins than the muscles of an ordinary human being, granting him superhuman levels of stamina, exceptional endurance, and lung capacity; in all physical activities. His lung capacity is at peak human level enabling him to hold breath for 6 minutes underwater, making his lungs as healthy as human's lungs can get. He can physically exert himself at peak capacity for several hours before fatigue toxins begin to impair him.

Superhuman Durability: T'Challa's skin, bone, and muscle tissues are augmented to levels that are considerably stronger and harder than human and the tissues are impervious to injury to an extraordinary extent.

Superhuman Healing: T'Challa's is able to regenerate injured tissue and brain cells to an extraordinary degree, heal broken bones, torn muscles, but is unable to regenerate missing limbs or organs. Is immune to all Earthly diseases, infections and disorders, he's impervious to gas attacks, poisons, and nerve-toxins of any kind and completely resistant to diseases.

Superhuman Agility: T'Challa's agility, balance, flexibility, dexterity, and bodily coordination are enhanced to levels that are beyond the natural physical limits of an Olympic gold medalist. He has the combined agility and acrobatic prowess of the most accomplished circus aerialists and acrobats.

Superhuman Reflexes: T'Challa's reaction time is superior to that of any Olympic athlete that has ever competed. His reflexes are so efficient that he can dodge and deflect point blank gun fire, dodge bullets from machine guns and sniper rifles. Captain America once stated that he's faster than the creature he was named after.

Super-Genius Intelligence: T'Challa is also a polymath genius and has an eidetic (aka photographic) memory. His genius is as such that he is one of the eight smartest people on Earth.

Master Martial Artist: He has been groomed to be a warrior from birth. An expert in practically all forms of armed and unarmed combat, and a master of all martial arts including African and unknown forms. He is a master of stealth, disguise etc. He is considered to be one of the best martial artists to have ever walked the Earth.

Master Acrobat: T'Challa is a rigorously trained gymnast and acrobat.

Expert Marksman: He is a master marksman adept with hunting knives, firearms, and other projectile weaponry.

Master Tactician: T'Challa is a genius tactician, strategist, and leader who is practically peerless. He was taught tactics and strategies in his youth by his father who encouraged him to always think two steps ahead of his enemies and three steps ahead of his friends. His prowess is such that he is able to out think and out maneuver individuals such as Tony Stark, and other geniuses.

Expert Tracker & Hunter: He is a master tracker and hunter. He can pick up a prey's scent and memorize tens of thousands of individual ones.

Multilingual: T'Challa can fluently speak his native language, English, and other various languages.

Master Inventor He can invent various devices with special properties when needed. While not all of his inventions are as good as others made by Tony Stark and so on, he possesses engineering abilities and intellect that makes him a peer and has proven to be able to invent and create weaponry that rivals their engineering capabilities. T'Challa can also duplicate practically any other technologies after learning how they work or by glancing at the designs.

Highly Influential Connections: As king of Wakanda, the Panther has access to a vast collection of magical artifacts, technological and military hardware, as well as the support of his nation's wide array of scientists, adventurers, and superheroes.

Diplomatic Immunity: As the leader of a sovereign nation, He often visits the United States or the United Nations for political reasons. He enjoys diplomatic immunity during these trips, and his embassy is considered foreign soil.

Black Panther has demonstrated exceptional feats of strength like wrestling down a Rhino and breaking its neck, knocking out a Polar Bear, stopping a Elephant's charge, sending Juggernaut flying with a kick despite his opponent's superhuman durability, destroying a water mill by bracing himself on the ground and flexing his muscles, even killing a T-Rex dinosaur while using a palm tree as a catapult while in a weakened state. He's classed at the peak of human potential.

In spite of his enhancements, T'Challa is still an ordinary human being. He is susceptible to some of the same vulnerabilities other normal humans are. Due to his heightened senses, bright lights, loud noises, & strong smells can potentially overwhelm him.

Equipment: Panther Habit: As the champion of the Black Panther Trials, the champion is gifted with a ceremonial regalia in the form of a Vibranium laced panther habit which has been passed down to each and every champion of the Black Panther Trials. The appearance of the suit has changed over the course of history, but has retained its abilities; This uniform has the ability to absorb vibrations via its Vibranium lacing, it can negate and/or lessen powerful kinetic based attacks such as bullets shots, penetrating blades, and crushing blows. The lenses in the mask cut glare and enhance the Panther's natural night vision, then lenses also allows him to see in infra-red and other visual spectrum. The suit features:

Retrieved from "https://marvelcomicsfanon.fandom.com/wiki/T%27Challa_Udaka_(Earth-1111)?oldid=176818"
Community content is available under CC-BY-SA unless otherwise noted.