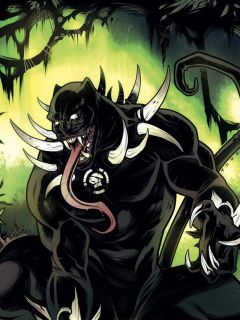 We will not let this world die in vain!

T'Challa was raised in Wakanda before the kingdom began to collapse as the war between Apocalypse and Ultron got worse. After T'Challa lost his family and S.H.I.E.L.D. fell, he joined the team of resistance fighters, the Avengers.

The Avengers would later encounter the Venom Symbiote, whose host, Eddie Brock, was forcibly separated from it and placed in a human concentration camp. The Symbiote sensed T'Challa's dread and anger, and bonded with him. The two became exponentially stronger together, and formed a very close bond.

Retrieved from "https://marvelcomicsfanon.fandom.com/wiki/T%27Challa_(Earth-9999)?oldid=245842"
Community content is available under CC-BY-SA unless otherwise noted.