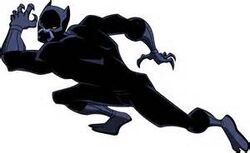 His home attacked by his would-be-kidnappers, T'Challa - Prince of Wakanda - was rescued by future X-Man, Ororo Munroe. The pair shared a romance and spent much time together, however, hunted down by the attackers, T'Challa prevented them from further exploring their burgeoning mutual attraction.

Black Panther has demonstrated exceptional feats of strength like stopping an elephant's charge. He's classed at the peak of human potential.

In spite of his enhancements, T'Challa is still an ordinary human being. He is susceptible to some of the same vulnerabilities other normal humans are.

Retrieved from "https://marvelcomicsfanon.fandom.com/wiki/T%27Challa_(Earth-727)?oldid=171341"
Community content is available under CC-BY-SA unless otherwise noted.