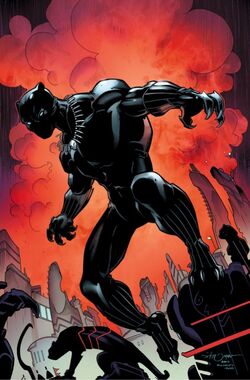 The spirit of Wakanda lives on, my son... And it will keep on living through you... Forever...

Before the years of Ultron Revolution, Black Panther seemed to have the same history with his Earth-61615 counterpart, until Ultron started an all-out war against humanity and those who dares to oppose him and his ideologies. Although at some point in his life (before the Ultron Revolution), T'Challa had a long-time romantic relationship with the heroic mutant Storm, to which they eventually got married, crowning her as the Queen of Wakanda. Later on, T'Challa and Sharon had conceived a wonderful child, and decided to name him Azari. T'Challa was supposed to retire in his heroic days, and live peacefully with his wife and son in his peaceful nation as the royal monarch, until Ultron's offensive made him get back into becoming the Black Panther one last time and prevent Ultron's crusade of technological singularity.

He and his people had no other choice but to live in an underground city in Wakanda, developed by his father. Before T'Challa, Ororo, and the nation Wakanda itself had fallen into the ground fighting for Earth's freedom against the menace of Ultron, he had their son taken to safety by Iron Man and other surviving heroes alongside with James Rogers, Torunn and Henry Pym, Jr. to keep them all safe from the hands of Ultron. Azari along with his other siblings only knew of the Avengers and other superheroes through Tony's tales of their former glory days. Even though T'Challa had died as the last king of Wakanda when the nation fell at Ultron's hands, he continuously reminded his own son through his memory before his untimely death, that its spirit will keep on living through him and in him, forever.

Retrieved from "https://marvelcomicsfanon.fandom.com/wiki/T%27Challa_(Earth-61616)?oldid=259108"
Community content is available under CC-BY-SA unless otherwise noted.