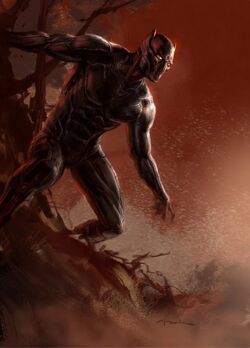 Vengeance has consumed you. It's consuming them that caused this mess. And I am done letting it consume me.

T'Challa (born between the late 1970s and the early 1980s) is the first biological son of T'Chaka, King of the African Nation of Wakanda nearing the modern era. His mother, N'Yami, died while giving birth and his adopted older brother, Hunter, blamed him for her death. His second mother, Ramonda, left the family when T'Challa was only eight. T'Chaka believed Ramonda had run away with another man, and so decreed that no one would speak of that woman in his presence again. Only decades later did T'Challa learn Ramonda had been kidnapped back to her native South Africa, though T'Challa would rescue her from those who were responsible for her captivity, bringing his second mother back to Wakanda several years later as the rightful Queen of Wakanda once more.

As a young man, T'Challa traveled to both America and Europe for a more immersive school. He gained a Ph.D. in Physics from Oxford University. B'Tumba, his childhood friend, was sent by his father N'Baza to study together. Due to his gifted intelligence, he bested at every sport and every endeavor. Throughout the years, T'Challa also befriended a young woman named Ororo Munroe in his time in New York for half a year, wherein their closeness led to the point that she revealed her status as a mutant and as a member of the X-Men, much to T'Challa's adoration for her selflessness and bravery to look out for her fellow mutants. The pair shared a blooming romance and spent much time together. Unfortunate for him, T'Challa's status and duties as a prince along with Ororo's secret life as an X-Man prevented them from further exploring their undying mutual attraction, especially when T'Challa flew back to Wakanda. The two remained separated by their heroic responsibilities, and wouldn't even be completely reunited by the strings of fate until the next following decades, specifically during the tragedy brought by Ultimate War, giving the two a chance to rekindle their lost love for each other.

After finishing his education in America and Europe, T'Challa returned to Wakanda, only later to witness his father got assassinated by Ulysses Klaue who created a vibranium sound-based weapon, and used it to kill the king. Due to his father being assassinated at the hands of Klaw, T'Challa eventually replaced his father as the king of the Kingdom of Wakanda, and took mantle of the role of protector of his tribe, the Black Panther to honor his father’s memory and avenge his death by later hunting the man who killed his father and serve him justice, or even vengeance if he deems it justifiable and necessary.

Prince T'Challa would later become the continuous king of Wakanda after defeating his uncle, King S'yan, in a once-a-year ritual that allowed anyone of Wakandan royalty to become king/queen by defeating the current ruler in hand-to-hand combat. Given the fact that the ruling Black Panther possessed enhanced and superhuman abilities from digesting the Wakandan Heart-shaped Herb, the chance of an average man defeating a Black Panther was slim. However in the end, T’Challa succeeded. He also digested the Heart-shaped Herb, which gave him superhuman senses and provided him with enhanced agility, strength, and over all physical capability.

All Hail the King!

Over a few years, the Black Panther had encounter several adversaries throughout inside and outside Wakanda, including those who challenged T'Challa for the throne from factions within his own country. At one time when his two most recognizable foes conspire to destroy Wakanda and claim the kingdom own their own, T'Challa teamed up with C.I.A. agent Everett K. Ross, the members of the Dora Milaje, Wakandan special forces, and even his former rival, M'Baku himself in the every end was convinced, to prevent Wakanda from being dragged into a anarchic civil war. Thankfully, with all the combined efforts of T'Challa and his collected allies, both Klaw and Killmonger were defeated and were taken into custody for a long while (before their eventual escape), keeping the nation of Wakanda safe once again from the hands its attempted invaders.

Enemy of the State

In the wake of Erik Killmonger's defeat in an attempt on dethroning the King of Wakanda himself, the international terrorist started to commence his back-up plan against T'Challa and his Royal Family, which was using and exploiting all of Wakanda's deepest, darkest secrets throughout the rest of the entire world against them, specifically every other governments all around the world, with the help of his new situational allies, Ulysses Klaw and a few memebers of the Intelligencia, who were also one of Black Panther's mortal archenemies.

When these two foes conspire to destroy Wakanda once again, the Black Panther must team up with Everett Ross, the Dora Milaje, and now, with the special help of his newly-found allies, such as some members of the heroic teams, X-Men and his most oldest trusted team, the Fantastic Four, to prevent him and Wakanda from being the public enemy of the rest of the entire world, including some of his own allies from turning against him, before its too late.

Shortly after the unhinged A.I. Ultron's first duel with the Avengers, he immediately traveled to the coasts of Africa, specifically Wakanda, in order to obtain Vibranium from an illegal black marketer and super-villain Ulysses Klaue (known by many as Klaw), which Ultron intends to use to create a new body. The current king of Wakanda, T'Challa donned his Black Panther attire after hearing the news of Ultron's arrival and assault on his kingdom and went into the scene to prevent the making situation from ever worsening that would cause more destruction in the kingdom of Wakanda.

He and his kingdom's forces decided to charge and defend the kingdom from Ultron's assault and his sentries. The Panther even successfully apprehended his long-time archenemy Klaw once again (though he manages to escape) and later, he confronted and tries to fight the megalomaniacal machine until his forces was eventually defeated and is close to being killed until the Avengers have arrived, and helped Black Panther retreat and leave Wakanda with the stolen Vibranium.

The Avengers alongside their newest ally, T'Challa finally clashes with Ultron, and try to destroy all of the sentries and his synthetic bodies so that he cannot escape. From that time on forward, Black Panther eventually becomes an official member of the Avengers afterwards, helping them defeat new faces of threat on Earth to prevent worldwide chaos and destruction from ever happening and if not, then at least they'll be avenging it.

The Power of the Panther: T'Challa was given powers and enhancements by the Bast's (Panther Goddess) ancient serum called the Heart-Shaped Herb, when he became the King of the Dead. All his peak human powers have been enhanced to superhuman levels, but to what extent is unknown. T'Challa has been empowered by the Heart-Shaped Herb to attain a physically enhanced state superior to a normal man.

Retrieved from "https://marvelcomicsfanon.fandom.com/wiki/T%27Challa_(Earth-61615)?oldid=268755"
Community content is available under CC-BY-SA unless otherwise noted.