T'Challa inherited the mantles of both Black Panther and the King of Wakanda after his father was murdered. Deciding to use his new position to jettison Wakanda to the forefront of the world, he joined the superhero team known as the Avengers as the Black Panther. He and his team would later be recruited by Nick Fury to join the Ultimate Alliance in the fight against Thanos and Doctor Doom.

After the Alliance's headquarters at the Helicarrier was destroyed, Black Panther offered up Wakanda to be used as a temporary home base. However, his home was eventually besieged by the Cabal, forcing the heroes to relocate to the Sanctum Sanctorum. 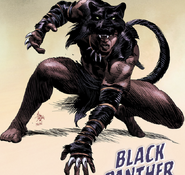 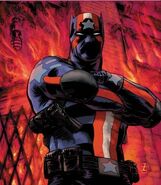 White Tiger
Add a photo to this gallery
Retrieved from "https://marvelcomicsfanon.fandom.com/wiki/T%27Challa_(Earth-6110)?oldid=252022"
Community content is available under CC-BY-SA unless otherwise noted.