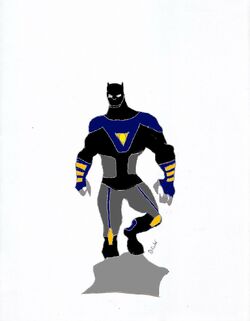 You "Masters of Evil" have clearly never met royalty. Someone needs to show you power and respect. We can do that and teach you some manners in a matter of minutes. Intriguing, isn't it?

Prince T'Challa was born to King T'Chaka and an unknown Queen, who died in childbirth. He was solely raised by his father, who had little time for him as he attended to unknown royal duties. Usually, he got to practice how he would act as future king, and passing many tests to become the Black Panther. He was shown the royal Vibranium mound, which excited him, as he was fascinated by its properties. He was looking forward to being the Black Panther, but he still wanted a friend. Luckily, he wish was soon granted, as Howard Stark visited his father to try to create Vibranium weapons, and he brought his son Tony on the trip. Tony and T'Challa became the best of friends, and a few months later, Tony was forced to return to the states. He and Tony still were able to maintain contact.

Tragedy soon struck the duo, as both of their fathers were killed by an unknown assassin. Right after his father's murder, he discovered the attacker to be Ulysses Klaw, a prospector who wanted to kill everyone with connections to Vibranium in hopes of gaining it all himself. T'Challa was able to defend himself and survive. He soon decided that he was ready to become Black Panther, so he asked the most promising young sorceress, Ororo Munroe, to conduct the ceremony. For unknown reasons, she fled, and the ceremony was still completed by other sorceresses. The power of the Black Panther was channeled into T'Challa, making him the sworn protector of Wakanda. He ruled the country well, and was able to prevent more attacks, all while bringing peace and prosperity to his lands.

But soon enough, Klaw became a threat again after turning his body into living sound. T'Challa fled to America to find the few people he had heard of that could possibly help him: the Avengers. He found them in the middle of a battle against an unknown adversary. He cut in to the battle, sticking to the shadows, but eventually made a move, slashing the villain. When the Avengers questioned him, he told them that he needed help with a huge problem only they could handle, and that he'd make a proper introduction once he got a costume. But soon, he got the news that Tony Stark had passed away in Vietnam. Everything in Tony's will had been left to T'Challa, since he had no family left, and he was his only friend. While sorting through the items Tony left behind, he found a suit of armor, an android, and a memory chip with the contents of Tony's personality. He tinkered with the android, and modified the armor. Soon he created the Panther Armor, and he introduced himself to the Avengers as the Black Panther. After they defeated Klaw, Black Panther joined their ranks. After discovering the memory was for the android, he mixed them together to create Tony's "vision." This Vision joined the Avengers' ranks and made them even stronger.

Super Senses: Due to undergoing the ritual of the Black Panther, Black Panther's senses have been enhanced a hundredfold, allowing him to see over a mile, and track people by scent.

Super Agility: Black Panther has agility and reflexes surpassing those of the average human.

Genius: Black Panther is well-versed in most types of physics and inventing.

Martial Artist: Black Panther is well-versed in all martial arts.

Weapons Expert: Black Panther is proficient in the use of tribal weapons, as well as his Panther Armor.

Claws: The armor has anti-metal blades that disintegrate all metal on contact and allow him to adhere to walls.

Super Durability: The armor is constructed of Vibranium, reducing kinetic impact and absorbing sound, as well as being bulletproof.

Uni-Beam: The armor has an energy-projecting square on the chest the projects energy in many varying wavelengths.

Retrieved from "https://marvelcomicsfanon.fandom.com/wiki/T%27Challa_(Earth-5)?oldid=255558"
Community content is available under CC-BY-SA unless otherwise noted.