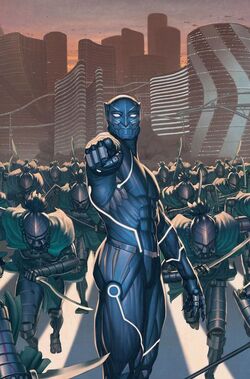 The Earth has fallen. My priority now lies with Wakanda, and Wakanda alone.

T'Challa became the King of Wakanda following his father, T'Chaka's murder. Seeking to repair Wakanda's relations with the outside world, T'Challa decided to join the Avengers.

However, his dedication to his new team would eventually prove to be his downfall, resulting in the deaths of both his sister, Shuri, and his wife, Storm, as well as several of his trusted allies and friends. Believing the Order of the World Tree to be unstoppable, the Black Panther returned to Wakanda and executed their last line of defense; encasing the entire nation in a holo-dome and launching into space.

Wakanda now travels the cosmos in search of a new suitable home planet for its people, led by the emotionally detached Black Panther.