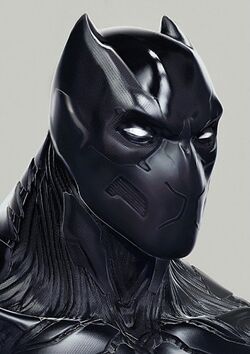 I did not ask to be King. I did not want it. But I have accepted the responsibility to protect my people. For that is the job of the Black Panther, but all before me allowed their responsibilities to end at our border. I will not be so shortsighted. The world is in turmoil, and Wakanda has the resources to help. No longer will we hide in the shadows!

Born directly into the Wakandan royal bloodline, the young T'Challa always admired his father, T'Chaka. T'Challa couldn't wait to grow up and become the Black Panther to protect the people of Wakanda, but he never liked to think about becoming King. When T'Challa turned 13, it was his time to venture out into the world to become more versed in the ways of the world.

T'Challa first ventured into a small Kenyan village, where he met a young girl named Ororo Munroe, who he discovered had the unique ability to control the weather. The two of them spent months together and fell in love before Ororo's adoptive father, the Shadow King, is defeated by a man named Charles Xavier, who then adopts Ororo. T'Challa promises her that they would one day meet again, and he continues his travels.

He then journeyed to the United States of America to backpack to the Mexican border and continue down to South America. After reaching adulthood, T'Challa opted to attend Oxford University in England where he earned a degree double majoring in Modern Government and Biotechnology/Genetics.

After returning to Wakanda, he was welcomed by his people with open arms. He reconnected with his parents and his little sister, Shuri, who had spent most of his time gone developing Black Panther tech for him. After settling back in, his father confided in him that he was retiring the role of the Black Panther, and it would be time for T'Challa to take on the mantle.

T'Challa began training immediately, and eventually donned the costume his sister had designed for him. Unfortunately, not long after he became Black Panther, his father was assassinated by T'Challa's cousin, Killmonger, and T'Challa was banished from Wakanda.

Seeking help to save his country, he sneaks into America and breaks into Avengers Tower to gather information on the newly formed superhero team. After obtaining everything he needed, he confronted the team to see how they handled themselves in combat. Although Black Panther was able to hold each of them off, he was impressed, and proceeded to ask for their help. In the end, it was Captain America who convinced the team it was their duty to help, despite hesitance from Iron Man and Hawkeye.

The Avengers were successful in supplanting Killmonger and establishing T'Challa as King. He then offered his membership to the team in an attempt to leap Wakanda to the forefront of the world stage to move them into the modern age. Captain America was more than happy to accept his offer, and he quickly became one of the Avengers's most vital members. He even had Wakanda join the United Nations in an attempt to put himself into the world's good graces.