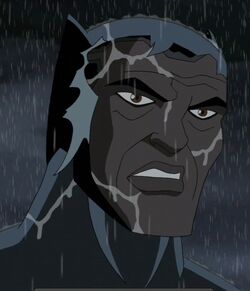 I see a great and new Wakanda -- the nation of my sons and their sons after them!

T'Chaka has the same origin as his Earth-616 counterpart.

In order to get the throne of Wakanda, M'Baku of the Jabari Tribe challenged T'Chaka. At first, the King seemed to have the upper hand, but he was eventually killed by the White Gorilla.

As chieftain, the Panther was entitled to eat a special heart-shaped herb that granted him superhumanly acute senses and increased his already formidable strength, speed, stamina, and agility to enhanced human potential.

Superhumanly Acute Senses: T'Chaka can see in total darkness as if it was a clear sunny day, something at over a few hundred feet appears as though it is right in front of his face. T'Chaka's sense of hearing is enhanced in a similar manner, enabling him to hear sounds that an ordinary human can't and to be able to hear sounds that an ordinary human can, but at much greater distances. T'Chaka can memorize tens of thousands of scents and track them to the exact location, can smell fear, and detect if someone is lying by change in body odor. T'Chaka's sense of taste is sensitive to the point that he is able to taste the exact ingredients of any particular food he is eating.


Peak Human Strength: T'Chaka's physical strength is considerably much stronger than the average human at his peak able lift just under 800 lbs. However, his new limits aren't known as of yet.


Peak Human Speed: T'Chaka is able to run and move at speeds superior to those of any Olympic athlete. He is capable of reaching speeds of 35 mph.


Peak Human Stamina: T'Chaka's musculature generates less fatigue toxins than the bodies of most humans. He can exert himself at peak capacity for several hours before fatigue begins to impair him.


Peak Human Durability: T'Challa's skin, bone, and muscles are augmented to levels that are somewhat harder and stronger than normal humans. The body is able to heal injuries that would prove lethal to ordinary humans by regenerating cells to a limited extent.


Peak Human Agility: T'Chaka's agility, balance, and bodily coordination are also heightened to the pinnacle of human development. He is superior to any Olympic level gymnast that has ever competed.


Peak Human Reflexes: T'Chaka's reaction time is superior to that of any Olympic athlete that has ever competed.

His strength is almost superhuman, Black Panther has demonstrated exceptional feats of strength like wrestling down a Rhino, knocking out a Polar Bear and even stopping a Elephant's charge. He's classed at the peak of human potential. Marvel handbooks class him strong enough to lift 750 lbs.

In spite of his enhancements, T'Chaka is still an ordinary human being. He is susceptible to some of the same vulnerabilities other normal humans are. Due to his heightened senses, bright lights, loud noises, & strong smells can potentially overwhelm him.

Retrieved from "https://marvelcomicsfanon.fandom.com/wiki/T%27Chaka_(Earth-1010)?oldid=204290"
Community content is available under CC-BY-SA unless otherwise noted.