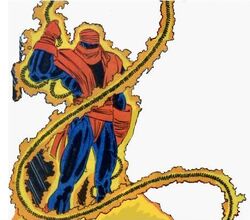 I come from the lowest of the low: rodeo hands. Where people cheer when you hit the dirt. My duty is to be the best damn X-Man I can be, so I never have to go back there.

Suvik Senyaka was born to two African parents in America, during a time where slavery still existed. He was always abused by the whites, and his life was very lonely. He consistently contemplated suicide, but his parents always found him. The sad thing was that no psychiatrist would treat him. So, eventually, he learned to get over his pain, and as a teenager, slavery ended. Most people immediately apologized to him, but some would despise him for the rest of his life. Soon, though, his mutant powers manifested, and he decided they would be good for one use only, the rodeo. There, he could ride animals and inflict the pain that was caused to him. For a time, he was gentle with the animals, but he began suffering from violent flashbacks, and he began killing the animals. Soon, an angry mob formed, and he was chased from the rodeo.

While running, everyone froze and fell over. Suvik was terrified about what would happen to him. Suddenly, a man descended from the sky and introduced himself as a mutant with telepathy and telekinesis. He informed Suvik that he was also a mutant who could drain life essence and create whips or enhance his own body. He told him that fellow mutants were endangered, and his knowledge of many environments could help. Desperate to escape the mob, he agreed, and took the codename Whiplash. He was safe from the mob, and he took a brilliant red and blue costume, taking the name Whiplash. After a fairly short spell with the team, he resigned from active membership, and decided to try another shot at the rodeo, now that he had more control over his powers and anger.

Bio-Electricity Absorption: Whiplash's mutant power is the ability to absorb the body's electricity, sometimes killing the victim. This enhances his body to higher levels:

Electric Whips: Whiplash could create bio-electric whips that could increase his absorption ability, paralyze or cause pain to others, and move at his mental command.

Expert Combatant: Senyaka was trained in unarmed and armed combat while working at the rodeo.

Retrieved from "https://marvelcomicsfanon.fandom.com/wiki/Suvik_Senyaka_(Earth-5)?oldid=59692"
Community content is available under CC-BY-SA unless otherwise noted.