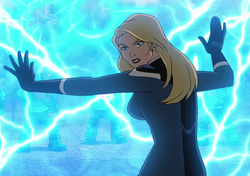 If only I could make all of my problems disappear.

Susan Storm went on a voyage to space alongside her fiance, Reed, her brother, Johnny, and their good friend, Ben. They were mutated by the cosmic rays and became the Fantastic Four, the world's premiere superhero team.

The Fantastic Four later teamed up with S.H.I.E.L.D. to fight against Apocalypse. When S.H.I.E.L.D. fell, Sue and the rest of the Four joined the Avengers to continue the fight.

She was heartbroken when her brother was abducted by Apocalypse's forces and brainwashed into becoming the Horseman of Famine. Despite devastating her, Sue only became that much more dedicated to bringing Apocalypse down.

Retrieved from "https://marvelcomicsfanon.fandom.com/wiki/Susan_Storm_(Earth-9999)?oldid=244632"
Community content is available under CC-BY-SA unless otherwise noted.