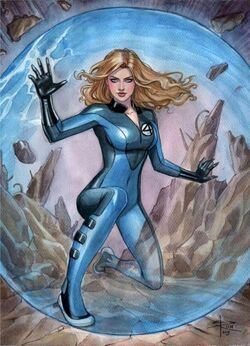 What? You haven't met someone who can turn invisible before?

The oldest child of renowned scientist Dr. Franklin Storm, Susan Victoria "Sue" Storm inherited her father's genius. From early childhood, she was one of the prodigies studying and working at the Baxter Building, a midtown Manhattan government research lab. Following her father into physics at such a young age, she would eventually change her focus to "inner space" biology. As young as fourteen, Sue would already become a formidable and well-respected scientist in her own right, earning four doctorates in bio-chemical sciences. With this, Sue suddenly finds mutual but puppy love with fellow student, Victor von Doom, only for their relationship to end after Doom realized that Sue was starting to get in his way of finishing his scientific works, making Sue realize that she and Doom weren't compatible to begin with. In her later adolescence years, however, Sue would later found herself being romantically-entangled with new brilliant Baxter Building classmate, Reed Richards (who would become Sue's eventual loving soulmate), placing her in a love triangle between Richards and Doom, whom the latter would eventually plan to propose to her when their adults. Her brother Johnny also spent his formative years at the Baxter Building labs, but he rebelliously resisted taking advantage of this opportunity to learn, much to Sue's dismay at him for Johnny not taking this chance seriously. Over the next few years both Susan and Victor, despite both feeling a little awkward at each other, helped Reed with their N-Zone mathematics, while Reed and Ben aided Victor's work in miniaturized robotics.

Accompanied by a bevy of military officers and scientists, Sue, Reed, Ben, Johnny, and Victor stood at the control panels of the transmit platform, and as the portal opens to the other side, the five of them were side by side trying to teleport an apple to the interdimensional gate leading to the N-Zone. But one tiny "miscalculation" turned into tragedy, transporting the five instead of the apple. Along with it, a brutal cosmic ray storm had battered the crew as they were on the alternate dimension. The Negative Zone's cosmic rays left Reed the ability to bend, stretch and expand his body in any imaginable way. Reed himself responsible for the accident which transformed the four, and he wrapped himself around his work in an attempt to reverse their condition. The exposure to the cosmic cloud brought out the worst in Victor von Doom. The evil genius even tried to turn Ben Grimm against Reed, convincing him that Reed was responsible for Ben's hideous appearance. Thankfully, Ben realized that Victor was out to ruin Reed and united with his friends to stop him from wreaking much havoc across New York City, and even beyond.

Sue, Johnny, Reed Richards, and Ben Grimm had now embraced their cosmic powers for the greater good, joining forces as the heroic Fantastic Four and battled against their new enemy, Doctor Doom. When the four officially named themselves as the iconic Fantastic Four to the very public, they dedicated to the use of their powers for the safety and overall benefit of humanity, along with their missions of further exploration across the cosmos. As a founder and the co-leader of the heroic four, Sue was labeled to be the famous and popular superhero known as Invisible Woman.

Invisibility: During her cosmic expedition to the Negative Zone, Sue Storm received her powers when cosmic rays bombarded her body. Mr. Fantastic suspects that Sue Storm somehow taps into hyperspace when she uses her powers. As yet, the only limit seems to be her own reserve; she is reluctant to stretch her powers until absolutely necessary. The Invisible Woman has the mental ability to manipulate ambient cosmic energy for a variety of effects, including the rendering of herself and other objects invisible, and the construction of solid, invisible force fields. In an as yet unknown manner, cosmic energy interacts with the cells of her entire body in such a way as to produce a new form of energy with unusual properties. By a simple act of concentration, she can cause all wavelengths of visible, infrared, and ultraviolet light to bend around her without distortion; she also somehow directs enough undistorted light to her eyes to retain her full range of vision while invisible. Sue can also generate invisible force fields that allow her to levitate herself or other objects, propel or manipulate them however she wishes, and generate invisible force weapons and protective shields.

Retrieved from "https://marvelcomicsfanon.fandom.com/wiki/Susan_Storm_(Earth-61615)?oldid=238860"
Community content is available under CC-BY-SA unless otherwise noted.