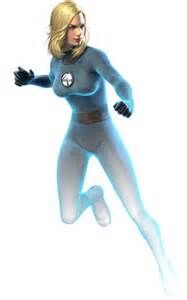 Little is known about the Invisible Woman's life before the Masters of Evil attack on the S.H.I.E.L.D. USS Alpha Helicarrier. It can be assumed to be similar to her mainstream counterpart.

2 year later, she became a member of the White Star. After the wireless network set up for the additional Thunderbolts, she then helped the renewed Ultimate Alliance defeat it.

Several months after the Fold's defeat, the team was held hostage on the 35th floor of the Baxter building by the Skrulls; guarded by a rebuilt Dragon Man. Because of failures to respond to calls by the Ultimate Alliance: Spider-Man, Toxin, Electro, and Deadpool are sent in to investigate why. Dragon Man is destroyed, and the Four are freed.

2 weeks later, word gets out of a recent attack at the Vault. The Fantastic Four (including the Invisible Woman) is sent to investigate. Upon arrival: they are approached by the Winter Soldier (after the Fold's defeat, Winter Soldier decided to reform) who was put in charge of the Vault by S.H.I.E.L.D. The five fight the inmates until they encounter the Klaw, who manages to incapacitate Winter Soldier. After his defeat, they find War Machine fighting mutant supervillain Whirlwind. A S.H.I.E.L.D. agent says that War Machine was the one attacking the Vault. After fighting through the [[Helmut Gruler (Earth-6109.2)]|Iron Cross]], Crossbones, and Grim Reaper: the Four see Whirlwind knock War Machine's faceplate off his helmet, revealing a Skrull in the armor. After the FF defeats the Skrull and heads back to base, its revealed that the attack on the Vault was to once again plant seeds of doubt about superheroes in the minds of people (which was a reason the Skrulls have manged to get the Secret Invasion officially started in the first place).

Sue has some modest experience and ability in the field of acting, and has recently taken up teaching. She is a capable unarmed combatant. She is renowned for her changing hairstyles (once said to match the Wasp's changing costumes).

The size, number, and movements of her force fields are limited only by her powers of concentration. Once she stops concentrating on an object, it ceases to exist.