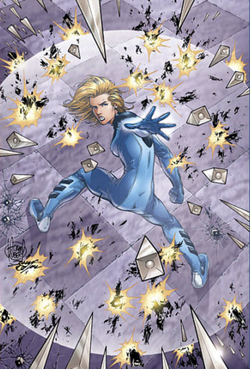 Did you know I can make a force field inside your stomach and slowly expand it until you burst?

Susan Storm is the only child of renowned scientist Franklin Storm. She grew up constantly being pressured to be a genius, which led her to resent her father. She would later attend and graduate MIT, eventually being recruited by Reed Richards to study Terrigen alongside him and Johnny Landau. One day, a lab accident turned the three of them, and Reed's cousin Ben, into Inhumans. They were quickly recruited by Potts International and fashioned as the super family the Fantastic Four, despite generally not liking each other.

Becoming the Invisible Woman, Sue was forced to pretend to be in a relationship with Reed in the public eye. However, she was secretly having an affair with Landau, who became the Human Torch. Reed and Ben, as well as the people at Potts, are completely in the dark as to their relationship.

[[Category: In a Relationship with Johnny Landau Characters]]