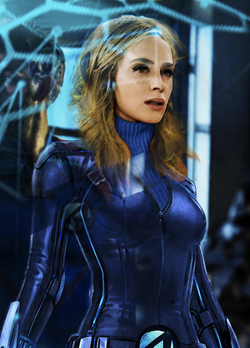 Susan Storm is the eldest child of Nobel Prize-winning scientist Franklin Storm, who ended up raising her younger brother, Johnny, after a car crash killed their parents. Susan became devastated when she got news of Johnny's death in a motorcycling incident while she was attending Harvard, but found solace in the arms of Reed Richards. The two of them would go on to form a contract with NASA to venture into space and study cosmic rays, but the voyage had an unexpected result, mutating both of them. While Reed was transformed into a monstrous Thing, Sue gained the ability to stretch to great lengths, turn invisible, and manipulate fire.

When S.H.I.E.L.D. formed the Avengers Initiative, Sue and Reed were some of the first heroes recruited, as they both felt they needed a place to belong. When the Avengers left S.H.I.E.L.D. to work for Tony Stark, they both went with them, although Reed a bit more begrudgingly.