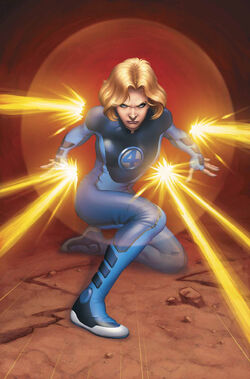 Susan Storm was the daughter of the famous scientist Theodore Storm and the sister of Johnny Storm. Like Reed she showed signs of massive intelligence when she was an infant. When she was 10 she enrolled at The Children Of Tomorrow Academy and was the second smartest student there (Victor Von Doome), she also had a crush on the 11-year-old Victor Von Doome.

When she was 14, a new student named Reed Richards arrived and he was extremely smart making Sue now the 3rd smartest person in COTA, she also had a tiny crush on Reed's shy/geekiness but liked Victor Von Doome more for his confidence, little did Sue know that Reed fell in love with her at first sight. The three became friends and remained friends until the age of 20-Years-Old.

At age 19, Sue worked at her 2 best friends company. One day Reed came out and suggested they all go into space to research the Cosmic Rays, they agree and Victor hires Ben Grimm and her brother Johnny Storm to fly the space-craft. A few months later they are ready to fly into space. While on the space-craft, Victor proposes to Sue and she says yes due to Victor being the love of her life (or so she thought) and Reed overheard everything and cut ties from the two. Later on they are exposed to Cosmic Radiation and are sent back crash landing to Earth, Sue wakes up 5 days later and sees that Ben, Johnny and Reed are still in comas due to them being effected by the radiation more. A few months later Sue realizes that Reed has stopped talking to her, but finally Reed calls her (only for science reasons). Reed then reveals that they all have powers and after months of finding out and testing their powers Sue finally masters her.

After Victor mastered his powers, he realized he can make the world a better place (so he thinks) and uses his power to become a "God", and then Sue, Reed, Johnny and Ben are forced to battle Victor now going by the name of Dr. Doom, after Doom knocks Reed, Ben and Johnny out. Sue is wounded and she realizes that Victor is not the man she once loved and was forced to kill him using her telekinesis by throwing a spear from a statue at Doom impaling him.

Formation of the Fantastic Four

After the death of Victor, Sue goes into a deep depression now that the love of her life is dead, no one remained in contact with each other and everyone was upset until Johnny broke the ice and told them to meet him. They all met with Johnny and he suggested that they should form a team to protect the innocent, they all agree.

Getting together with Reed

After almost 12 months of mourning over Victor's death, Sue started to come along until Reed and Victor (who was not truly dead) swap minds and Reed as Victor asks Sue for help but Sue thinks its a sick joke and hangs up, later after Reed gets back to his own body, he confesses that he loves her deeply from the day they met and Sue returns the feelings and the 2 share a passionate kiss and start a relationship.

Sue Storm possesses the ability to mentally bend all wavelengths of light around her or her target. This ability allows her to render the target in question invisible to the human eye and all forms of electronic detection. Sue can also generate invisible force fields that allow her to levitate herself or other objects, propel or manipulate them however she wishes, and generate invisible force weapons and protective shields.

Sue is a child prodigy and scientific genius, possessing expertise in the bio-chemical sciences, including biotechnology and biophysics.

Retrieved from "https://marvelcomicsfanon.fandom.com/wiki/Susan_Storm_(Earth-1315)?oldid=54792"
Community content is available under CC-BY-SA unless otherwise noted.