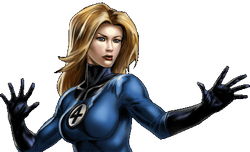 Sue Storm was a genetics research scientist working for Victor von Doom. This Invisible Woman's powers are powered by strong emotion, and her normal clothing doesn't turn invisible when she does. She was in the middle of a love triangle between Reed Richards and Doom, who proposed to her. After she gained her powers she spurned Doom.

Force Fields: Susan is able to create force fields to do a variety of things, such as, stop explosions or fire from expanding, blasting away people or objects, level a large building structure so Ben could lift it back into place.

Possibly on the same level with Reed Richards intelligence-wise.

She is allergic to orchids. Prolonged usage of her powers puts strain on her, especially if she is putting in a large amount of force, resulting in nosebleeds and finally falling unconscious. Though through practice, the time and strength with which she can use her powers without harm can be increased.