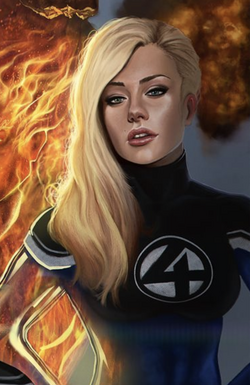 Reed, it's important to me that you know three things; 1. I love you, 2. We are stronger as a family and we can do anything we set our minds to, and 3. I'm only a teensy-weensy bit smarter than you. Okay?

Susan Storm is the oldest child of Franklin and Mary Storm. She is 8 years old than her little brother, Johnny, and there's always been a bit of a divide between them. However, when Sue was 17 and Johnny was 9 they were in the car with their mother when they got in a crash with a drunk driver, which claimed their mother's life. Sue went into a coma for two weeks, and Johnny barely had any memory of the accident.

After waking up from the coma, Sue threw herself into working with her father in the Baxter Foundation. While there, she met Reed Richards, who she instantly became enamored with. The two became close, but when Reed left the Foundation, Sue went on to date Victor von Doom, the heir to the Latverian throne. However, after a few months, Sue became fed up with his arrogant attitude and broke up with him, which resulted in him spiraling into his work and accidentally scarring himself.

Sue was later recruited by her father to join a project on building a space craft to study cosmic rays. While working on this project, she was reunited with Reed, and the two of them struck up a relationship. Johnny later joined the mission in an attempt to prove himself, which Sue tried to convince him he didn't have to do, but he wouldn't listen. In the ensuing flight, they were all exposed to a cosmic storm which mutated each of them into a different breed of super-being.

Developing the ability to turn invisible and project force constructs, Sue was the first to conquer her powers. When they went public as the Fantastic Four, she was initially dubbed the Invisible Girl by the press, which she rebuffed in an interview and named herself the Invisible Woman, despite Johnny suggesting the name "Miss Disappear".