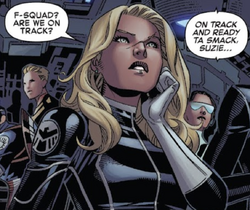 The whole damn universe is in disarray. Over half of all life is dead. Sometimes I wonder what the point of carrying on even is... but then when I get back out there on the field, and I see the terror in the people's eyes... I know that I'm doing this for them... and I'll never stop.

Susan Storm joined her fiance, Reed Richards, on a venture into space to study cosmic radiation. Accompanying them on this quest was Reed's best friend, Ben Grimm, and Sue's own brother, Johnny. Initially, their mission seemed like a simple research and reconnaissance project, but things quickly took a turn when a cosmic storm began heading towards their ship.

They were each bombarded with cosmic energy, and crash landed on Muir Island, where they discovered they had each been imbued with incredible abilities. They decided to use their powers to become the Fantastic Four, the world's most famous team of explorers and superheroes. Over the next several years, the Fantastic Four worked alongside the likes of other heroes including the Avengers and the X-Men.

However, there eventually rose a threat that none of the heroes were capable of fending of. The threat of Ragnarok. Following the death of Thor, the Nine Realms fell into chaos, which quickly expanded to include the rest of the universe. As death began to spread throughout the galaxy, the last remaining planets with life on them were thrust into a new solar system called the Andromeda System by the combined power of the Beyonder and the Celestials.

During the relocation process and the end of Ragnarok, Sue not only lost her husband, but also their newborn son, Franklin. Susan was devastated by the immediate and drastic change to her reality, and became even more unstable when her brother opted to join Apocalypse in scouring the rest of the universe outside the Andromeda System. Feeling like she had lost everything important to her, Susan abandoned her life and changed her last name to Smith in an attempt to regain some sense of normalcy.

However, as the Earth's remaining heroes attempted to piece S.H.I.E.L.D. back together, she was eventually approached by Ben Grimm, who told her that Reed would've wanted her to continue the fight. Reluctantly, Susan agreed to join S.H.I.E.L.D., but refused to join their team of superheroes they were calling the Ultimates. Eventually, seasoned S.H.I.E.L.D. Agent, Phil Coulson, offered Susan the position of Director, due to her intergalactic experience that would help the humans gain some grand standing in the newly formed Galactic Council.

Susan accepted and immediately became swamped in inter-planetary paperwork and meetings with the representatives from Berhert, Xandar, Vanaheim, Spyre, and Torfa. She didn't mind being taken out of the action, but she quickly became overwhelmed and annoyed with the bureaucratic nonsense. She and S.H.I.E.L.D. scientist Leo Fitz eventually perfected transferring the AI F.R.I.D.A.Y., created by Tony Stark before his death, into the body of an LMD.

Susan began working closely with F.R.I.D.A.Y. to focus more hands on with how the people of Earth were faring. Due to Captain Marvel rounding up a group of some of Susan's most trusted heroes and leaving the System to hunt the Heralds of Apocalypse, she found herself entrusting her old friend James Rhodes, now going by Captain Gamma, to take her spot as the Earth's Representative on the Galactic Council.

Ever since she has switched her attention to focus more on Earth, she has found herself being pulled back into action more than she would like. Using her powers seemed to trigger some of her PTSD, reminding her of Reed and Franklin. Ever since then, she has begun filing through some of Reed's old research on how to cure the effects of the cosmic radiation.