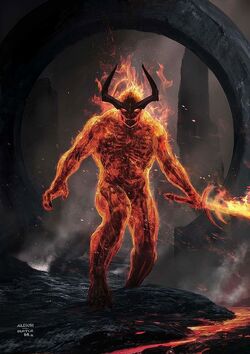 Surtur the Fire Giant, the Flame Giant, God of Fire, God of Flame, Red Lord, Son of a Bitch
Identity

You cannot stop Ragnarök... Why fight it?

Surtur was native to the extra-dimensional plane and dyson sphere of Muspelheim, one of the planets on the Nine Realms, and was now one of the most notorious mortal enemies of the current Asgardian ruler and warrior Odin Borson, and eventually, his son Thor. In his early years during the universal genesis of the reality's entire existence, Surtur was nothing but a mere normal sized but already sentient humanoid that was born from the very last seedling of a mutated Celestial who unfortunately died on the hellish realm that would eventually be called as Muspelheim.

However, just as the offspring was expected to perish soon as well the same as his progenitor and its deceased siblings, the offspring somehow managed to adapt the realm's flaming and melting environment, with its genetic structure continuously and consistently evolving throughout hundreds of thousands of centuries within the realm that seemed like a living hell, with the deadly geothermal energy (often known by mortals as the Eternal Flame) of the planet's outer core, which is somehting that also constantly released by the Nether Core, the very star the planet itself encompasses, as its only main source of sustainability, until it finally grows into a gigantic fire behemoth capable of committing such cosmic annihilation and destruction, something that he fully embraced after properly discovering the rest of the great Nine Realms later on, once he wills it so.

Prophesied to be the one of the possible, if not the most likely main factor to initiate the Asgardian apocalypse known as Ragnarök by both the many seers and intellectuals across the Nine Realms, the Asgardian warrior and monarch Odin and his mighty armies successfully defeated the fire demon during a great self-contained war between the Asgardians against the alliance of the Fire Demons and the frosty Ice Giants led by Ymir, stole from him the main source of his apparently unlimited power, the Eternal Flame, before apparently using his all-mighty power through "Asgardian Magic," casting a powerful spell to banish him and his entire race to the realm of Muspelheim without escaping, his own birthplace and kingdom, for the rest of their eternal lifetimes, not unless he perseveres to find a way out of his cursed banishment.

Fire Demon Physiology: Surtur was depicted as an immense and malevolent being whose possesses the power of a thousand blazing suns. Surtur is an enormous fire demon, standing over 1,000 ft. in height. He is more of a force of nature than a physical foe. He possesses superhuman strength, stamina, and durability far surpassing that of Thor. He is a being composed of "living" flame so strong that he can affect the Earth's temperature from Asgard and can manipulate cosmic energy to generate intense heat, flames or concussive force.

He can also manipulate cosmic energy for various effects, including levitation, molecular manipulation of himself, inter-dimensional teleportation, and immortality. Surtur's powers are usually shown to equal those of Odin. The Eternal Flame has an unknown connection to Surtur. When in its vicinity, Surtur claimed it increased his powers. It is unknown to what extent this power increase leads to.

Retrieved from "https://marvelcomicsfanon.fandom.com/wiki/Surtur_(Earth-61615)?oldid=265329"
Community content is available under CC-BY-SA unless otherwise noted.