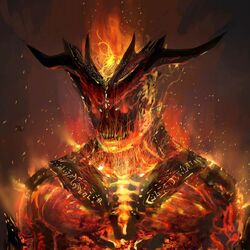 The King of Fire, The Devil of Devils, Hel Incarnate
Identity

Behold, Thunderer, as I make your precious Nine Realms my own.

For centuries, Surtur was the most powerful enemy the forces of Asgard had ever seen. His realm of Muspelheim was only allowed a place among the other realms in order to keep him in check. After Odin retired from battle to focus on politics, Surtur turned his disdain onto his son, Thor, who took his place as the self-anointed protector of the Nine Realms.

For years, Surtur squabbled on and off with Thor and his allies in the Avengers. Eventually, he was approached by the Dark Elf Malekith, who offered him membership into an exclusive club called the Order of the World Tree. Intrigued by the group's purpose, to kill Odin and claim control of the Nine Realms, Surtur agreed. He found himself now allied with Malekith, Kurse, Amora the Enchantress, Hela, Ulik, Laufey, Ares, Mephistopheles, Karnilla the Norn Queen, and the Serpent. Unamused by Malekith's attempt at leadership, Surtur assumed command of the Order, and promptly launched an attack on Midgard.

Using the Siege on Midgard to distract Thor, Surtur and the Serpent assassinated Odin, and then proceeded to curse the World Tree, Yggdrasil, in order to merge all Nine Realms into one plane of existence.

Essentially creating a new solar system at the center of the galaxy, Surtur was able to expand his grasp and take control of the entire universe. However, he is still battling against insurgents led by Thor's former allies, the Avengers and other Earth heroes.

Retrieved from "https://marvelcomicsfanon.fandom.com/wiki/Surtur_(Earth-2001)?oldid=260783"
Community content is available under CC-BY-SA unless otherwise noted.