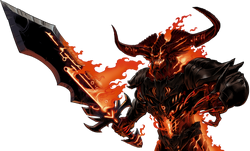 Occasional ally of Loki, Malekith the Accursed, Ymir
Relatives
All the Fire Demons are his offspring.
Universe

The Eternal Flame and the sword, Odin! Can you hear them? They call to one another! You have spoken of power! Now feel the might of Surtur in his glory!

Surtur was native to the extra-dimensional plane of Muspelheim and was the mortal enemy of the Asgardian ruler Odin and his son Thor. Surtur and the ice demon Ymir were older, and therefore more powerful immortals than Odin and Thor, who were always hard pressed to defeat them.

A portal opened from Muspelheim close to the planet of Korbin. The planet was invaded with hordes of Fire Demons. The people created a warrior to fight back Beta Ray Bill. The demons were to much for the hero and the people had to flee in a fleet of ship lead by Skuttlebutt. This lead to him meeting Thor and gaining a mystical hammer Stormbreaker to fight the demons. The two warriors fight the invading demons together.

Surtur was depicted as an immense and malevolent being whose possesses the power of a thousand blazing suns. Surtur is an enormous fire demon, standing over 1,000 ft. in height. He is more of a force of nature than a physical foe. He possesses superhuman strength, stamina, and durability far surpassing that of Thor. He is possibly a being composed of "living" flame so strong that he can affect the Earth's temperature from Asgard and can manipulate cosmic energy to generate intense heat, flames or concussive force. He can also manipulate cosmic energy for various effects, including levitation, molecular manipulation of himself, inter-dimensional teleportation, and immortality. Surtur's powers are usually shown to equal those of Odin. Surtur has a prehensile tail.

The Eternal Flame has an unknown connection to Surtur. When in its vicinity, Surtur claimed it increased his powers. It is unknown to what extent this power increase leads to.

Surtur is a master warrior and swordsman, and he possesses vast knowledge of ancient and arcane wisdom.

Surtur is vulnerable to intense coldness. He is also vulnerable to magical attacks or by other beings wielding cosmic energy powers equaling his own.

Retrieved from "https://marvelcomicsfanon.fandom.com/wiki/Surtur_(Earth-1010)?oldid=259061"
Community content is available under CC-BY-SA unless otherwise noted.