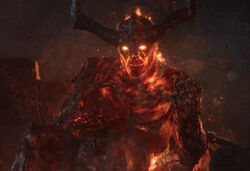 It is my destiny to drive my sword through the heart of Asgard.

Muspelheim is the fiery land of the Fire Demons, who are ruled by the almighty Surtur. He has always held pure hatred for that of Asgard, and especially their King, Odin.

When Odin's son, Thor rose to prominence as the protector of the Nine Realms, Surtur made it his mission to get to Odin through him. But Thor proved much more formidable than he anticipated, and the two have since formed an intense rivalry.

After Odin's death and the destruction of Asgard, Surtur felt cheated out of his destiny. After discovering that the Asgardians had relocated to Midgard, Surtur made his play against the construction of their kingdom. He engaged in a fierce battle with Thor, but was interrupted when Queen Freyja came forward and brokered a peace agreement with Surtur. He agreed to her terms, so long as she accompanied him back to Muspelheim to serve as a trophy.

Retrieved from "https://marvelcomicsfanon.fandom.com/wiki/Surtur_(Earth-101)?oldid=250238"
Community content is available under CC-BY-SA unless otherwise noted.