Start a Wiki
Surke Dilah'm is the son of Namor. He has a form of regressive atavism. But, he is royalty and as such was already very powerful before his unique atavism started to regress.

Surke Dilah'm was born nineteen years ago in Atlantis. Immediately it was noticed he had sharp shark-like teeth, shark-like eyes, and gills on both his cheeks and shoulders. Leading some to believe he was a demon, but this was clarified by Professor Charles Xavier saying he has a form of regressive atavism.

Professor X hypothesized that Surke would continue to morph more into a shark-like humanoid, like Wolverine would do as a beast-like humanoid. At seventeen he done battle with Doctor Doom and Baron Mordo, as well as millions of undersea creatures being controlled by them and won. Shortly after, when he reached adulthood his body started to bulk up for no apparent reason.

When he turned nineteen his face became more shark-like in appearance and his eyes changed to yellow.

Currently his body has became more shark-like, and muscular. His father is currently trying to find a cure to Surke's unique condition.

Originally Surke was comparable to Aquaman in physical capabilities, but over the years Surke's unique atavism has morphed him into the single strongest and most powerful Atlantean by far.

Surke is a master of Atlantean magic. He can use to to a variety of thing that only the most skilled of Atlanteans can do.

Atlantean Biological Adaption: The Atlanteans are an offshoot of humanity that is biologically adapted to the deep ocean environment. For most Atlanteans, this means that can breathe underwater, endure the pressures of the deep (among other adaptations), and can only spend a very limited time out of water. He also possesses superhuman levels of strength, speed, endurance and durability, all by-products of his body being adapted to survive unprotected in the tremendous pressures of the ocean depths. Although other Atlanteans possess similar adaptations, Surke's royal lineage makes him a super-Atlantean as well as super-human, and as such he has greater physical capabilities than a typical Atlantean.

Animal Mimicry: Surke has the ability to mimic the characteristics of all the undersea creatures. Some of the abilities he has demonstrated are;

Magic: Surke has the ability to use advanced Atlantean magic and can use it in conjunction with his forging skills to create very powerful enchanted weapons. With Atlantean magic Surke can control water in all it's forms, walk on water or up vertical surfaces, transform into water in any form, harden water to nigh-indestructible levels, absorb an unlimited amount of energy, prolong his stay on land so he doesn't get weaker or insane as fast, cancellation of other magical forces, teleport, create weapons of enormous power, and make up to ten duplicates of himself (these duplicates have exactly the same skill-level with the same equipment), etc., etc., etc..

Master Swimmer: Surke is definitely the worlds best swimmer. He is able to swim in any temperature of water including boiling and freezing water, salt or fresh water, clean or dirty water, et., etc., etc.. Surke is also the absolute fastest swimmer in the world, possibly in the universe.

Indomitable Will: Surke has shown to have a powerful force of will. He does not back down from any foe, does not give into a fight and is willing to lay down his own life in defense of others.

Master Combatant: Surke is a master of a variety of hand-to-hand combat skills. Surke is one of the most talented and ruthless warriors that has ever fought on Earth. He is a superbly skilled warrior trained in the arts of war and various fighting techniques by his teachers in Atlantis. Surke is a master marksman, and is proficient, even masterful in all areas of combat, including hand-to-hand and various forms of weaponry available in Atlantis, including spears, swords, shields, etc.. He has over a decade of combat experience. He is known to be very cunning and intuitive in battles and wars.

Master Strategist and Tactician: Surke is a very accomplished strategist and tactician. For over a millenia, he has lead Atlantis, and the seven swordsman of Atlantis into battle against forces with great leadership and employing strategies and tactics from possibly every culture on Earth, including forgotten ones.

Master Torturer: Surke is well versed in the art of Atlantean torture. Given the fact he leads the Seven Swordsman of Atlantis or the "Torture Squad", a questionably violent and ruthless mercenary group started by him that is well known for their physical, mental, and emotional torture it is pretty safe to say he is one if not the most proficient in the art of torture.

Multilingual: Surke reads and speaks virtually every language on Earth.

Class 100+ Superhuman Strength: While Surke is in water he had immense physical strength capable of lifting millions of tons without effort. Furthermore his physical prowess was so great that he has been referred to as one of the most powerful beings on the planet. After his first atavistic mutation, Surke easily lifted billions of tons with no apparent effort what so ever. After his third atavistic mutation his strength couldn't be accurately determined, but it can easily be assumed it's virtually limitless while in the water.

Class 75-100 Superhuman Strength: While at minimal level of strength due to him being out of water for an extended period of time he can only lift a hundred tons with supreme effort. Originally he could only lift seventy-five tons.

Water Deficiency: When not exposed to water, many of Surke’s physical attributes gradually decline and can reach a point where he possesses only a small fraction of his powers. Surke's strength, stamina, and durability are affected most and, at their minimum known level, are much closer to the levels possessed by the vast majority of other Atlanteans. Renewed exposure to water will immediately restore his abilities.

Oxygen Imbalance: Surke has demonstrated a vulnerability to oxygen imbalance when remaining too long in either water or air, resulting in manic-depressive mood swings. Surke is believed to be in the midst of an imbalance during the times in which he becomes angry very easily, which he is well known for, and is unable to think clearly and logically. He can prevent this imbalance, however, by dividing his time between the two atmospheres. He has occasionally used scientific or magical means to regulate his oxygen levels. With the imbalance properly controlled, Surke has shown himself to be a much more capable leader and generally much easier to be in contact with.

Samehada: Samehada is a semi-sentient sword able to choose it's wielder. Once the blade chooses its wielder it's very loyal to him/her. As the blade is made up of scales, it inflicts injuries through shredding or shaving what it comes into contact with, rather than just cutting the object in question. This flaying effect is similar to a shark's skin, hence the sword's name. While it ordinarily remains rigid, Samehada's hilt is able to stretch and bend to great extent, allowing the weapon to be used like a flail. Samehada has the unique ability to drain the targets physical energy allowing it to drastically weaken an opponent, and when it does this it feeds it back into Surke's stamina.

Headband: Surke had a headband on his head. It astronaumically amplifies sent impact damage, and the metal part is indestructible.

Swimming: Most places he goes, he just swims there. 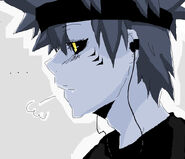 Surke after his battle with Doctor Doom and Baron Mordo.

Surke before his first, second, or third mutation. 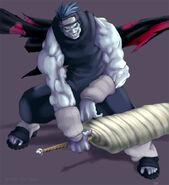 Surke after his first mutation.

Surke after his second mutation.

Surke after his third mutation.
Add a photo to this gallery

Retrieved from "https://marvelcomicsfanon.fandom.com/wiki/Surke_Dilah%27m_(Earth-616)?oldid=258389"
Community content is available under CC-BY-SA unless otherwise noted.