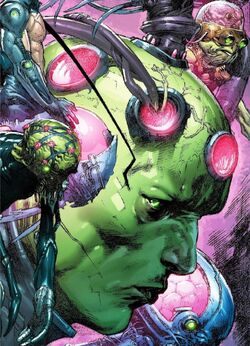 Earth-61615
Base Of Operations
Hala, mobile across the Kree Imperial colonies
Characteristics
Gender

As our people have always believed for the past millions of years... Live Kree or die...

-- Supreme Intelligence, in the digital form of Gen-Rogg

The Supreme Intelligence, also known as the Supremor, was an organic artificial intelligence that was created more than a million years ago by the advancing extraterrestrial race known as the Kree to help them recreate a Cosmic Cube like the one that their enemies, the Skrulls, had once unintentionally created. It is composed of the brains of the greatest Kree minds years even before the Kree Empire was established (thinkers, generals, philosophers, scientists, previous rulers and so on), with their consciousness being duplicated upon their deaths and assimilated by the artificial intelligence after the minds have been uploaded on it. Eventually the Supreme Intelligence had developed a mind of its own after being left to learn of its existence, and refused to create the cube knowing the dangers that could be wrought by an evolved Cosmic Cube, which was what had destroyed massive parts of the Skrull Empire.

Despite this, it was allowed to continue to exist to serve the Kree with its wisdom. Its influence eventually grew to the point where it almost replaced the government of the Kree Empire, although this idea has occasionally been deposed for periods of time, with its leaders believing it would be safer for the Kree to keep the existence and role of the Intelligence as its true ruler, as low as possible. Most of the Kree have fanatically devoted to it, and its worship is an organized religion, serving as the ultimate deity, mentor, and the secret de-facto ruler of the Kree Empire. The Supremor realized long ago that the Kree were at an evolutionary dead-end. As a result, one of its main concern became to find a way to jump-start and progress its race's evolution.

Organic Artificial Intelligence: Despite being physically immobile, the Supreme Intelligence possesses all known psionic powers, such as telepathy, telekinesis, cosmic awareness, sensory link, postcognition, precognition etc. The Supremor is also capable of manipulating energy and matter, as well as create up to three android servitors that act as its eyes and ears when away from itself. These androids, called Supremor also, possess some degree of independence when created, but are totally loyal to the Supremor. It usually projects images of itself across space, Cyberspace and even into the Astral Plane, in the form of a greenish, humanoid face, to communicate with its agents scattered across the cosmos. Within its dimension, the Supreme Intelligence can create a body to communicate with the person who wants to talk to it, usually choosing someone that is familiar to the recipient. Its power was only further enhanced when it later merged with an inert Cosmic Cube, which now serves as its true housing, kept in a separate room from the organic computer facade it created to fool would-be assassins.

It's physical body is linked to it's holding tank the destruction of this tank can in turn lead to the death of the intelligence.

Retrieved from "https://marvelcomicsfanon.fandom.com/wiki/Supreme_Intelligence_(Earth-61615)?oldid=232431"
Community content is available under CC-BY-SA unless otherwise noted.