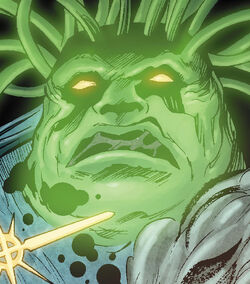 Do not forget what has been given can be taken away.

During the technological revolution of the Kree Empire's early days, Hala's greatest minds developed a system to link their minds together in order to lead the Kree more efficiently. It did not go exactly as planned, and their minds all became one large collective deemed the Supreme Intelligence.

Over the decades, more and more members of the Kree Empire joined, including scientists, philosophers, and decorated soldiers. It was the Intelligence who decided that the Kree needed to expand their Empire beyond Hala, which ended up sparking the Kree-Skrull War.

Retrieved from "https://marvelcomicsfanon.fandom.com/wiki/Supreme_Intelligence_(Earth-101)?oldid=247670"
Community content is available under CC-BY-SA unless otherwise noted.