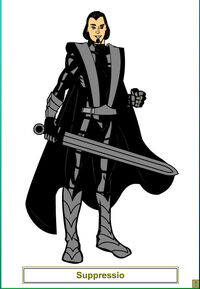 Suppressio has the same abilities as the Sandman. He has intense mystical powers, but its limit is unknown. Because of his bond to the DarkCrystal, he can feed off the power in the Nightmare Zone, being more powerful there then anywhere else.

Retrieved from "https://marvelcomicsfanon.fandom.com/wiki/Suppressio?oldid=255943"
Community content is available under CC-BY-SA unless otherwise noted.