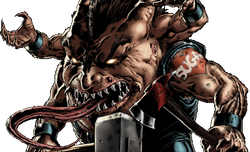 Earth-1010
Base Of Operations
The Alley
Characteristics
Gender

Sugar Man was a slaver and a geneticist, who performed hideous experiments in a Seattle prison camp before he was recruited by Mr. Sinister to join him and Apocalypse.

Powerful Tongue: He has a tongue of indeterminate length that is able to pierce almost anything, including stone, steel and even beings in gaseous or liquid form.

Size and Mass Alteration: He is also able to control his own mass. If he loses mass, the lost mass is shunted off to some unknown location, presumably an extra-dimensional space and he shrinks in size. It's unknown how long it takes him to regain his normal size.

Equipment: None known.
Transportation: None known.
Weapons: He is normally seen with a hammer and an axe, including guns.

Retrieved from "https://marvelcomicsfanon.fandom.com/wiki/Sugar_Man_(Earth-1010)?oldid=259048"
Community content is available under CC-BY-SA unless otherwise noted.