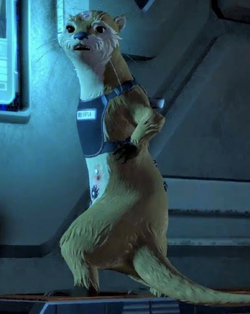 Oh, Rocket, when will you ever accept that you have people who love you? And admit that you love them, too?

Halfworld had always been a rumor among the galaxy. A planet fabled to possess copious amounts of animal species, untouched by intelligent life. That changed when an unnamed cadre of scientists arrived on the planet and instantly began experimenting on the animals there.

Lylla was one such animal. Her treatments were directly inspired by the successes of Subject 89P13, which resulted in her gaining above average intelligence and flexible mobility. Eventually, she was freed by Subject 89P13, who had named itself Rocket.

The two of them made their escape from Halfworld together, and in order to make a living, turned to a life of crime, which came easy to them as they looked like unsuspecting and harmless cute little animals. Eventually, they arrived on the Celestial space station Knowhere, where Lylla was able to find steady work at a pawn shop. She believed that she had finally found a place to settle down, but Rocket did not share that belief.

Rocket left Lylla behind to continue his career of thievery among a crew of criminals who called themselves the Guardians of the Galaxy. Lylla was heartbroken, but believed if he could not change his ways, she was better off without him, and continued to live comfortably on Knowhere for years. Eventually, she heard tales of the Guardians actually using their resources and powers to save the galaxy, and she began to believe that Rocket had lived up to his potential.

He eventually returned to Knowhere, and they reunited, agreeing to try a long distance relationship. But it did not work, as Rocket's responsibilities as a Guardian became too important. However, Lylla decided that maybe he had the right idea when he left Knowhere, and she opted to quit her job and join the Guardians.

Average Strength... for an Otter

[[Category: In a Relationship with Rocket Characters]]

Retrieved from "https://marvelcomicsfanon.fandom.com/wiki/Subject_89P14_(Earth-101)?oldid=250237"
Community content is available under CC-BY-SA unless otherwise noted.