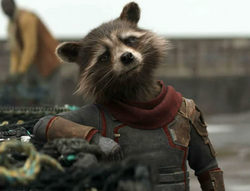 As long a I'm stuck on this miserable planet, I might as well try and save it.

Rocket Raccoon was a member of the Guardians of the Galaxy. One day, he traveled to Earth on his own to try and steal some of Apocalypse's Celestial technology. However, his timing was less than ideal, as he was on Earth right at the time when Ultron activated his Vibranium force field and surrounded the Earth.

Distraught and unsure what to do, Rocket was contacted by the Avengers, who offered him a chance to fight against Ultron and Apocalypse to one day reunite with his family in space.

Average Strength for a Raccoon

Retrieved from "https://marvelcomicsfanon.fandom.com/wiki/Subject_89P13_(Earth-9999)?oldid=245253"
Community content is available under CC-BY-SA unless otherwise noted.