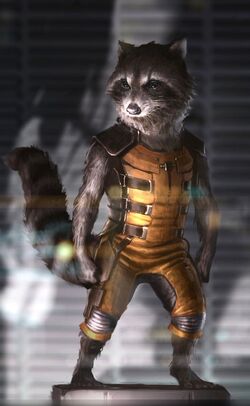 Earth-89013
Base Of Operations
The Outside
Characteristics
Gender

Who wants some?! I may be the smallest one here but I can still make meat suits out of all of you!

Rocket worked as an inter-galactic bounty hunter for years until he accepted a mission on Earth to capture Mister Fantastic, but ended up getting captured by the Fantastic Four and imprisoned in Prison 42 for five years. After Annihilus's forces destroyed the prison, and the portal to the real world was opened, Rocket was one of the few inmates to escape back to Earth. Once there, he began plotting his revenge against the Fantastic Four.

Rocket was eventually recruited into the Renegades by The Outsider under the promise that if he returned to his home reality, he would be recaptured by the Fantastic Four, and skinned alive in prison. Rolling his eyes at this notion, Rocket decides to abandon his quest for vengeance and travel the multiverse to kill random people who have done nothing to him.

Rocket survived Odin's take over of the Renegades by instantly pledging his loyalty and becoming Odin's right hand. After Odin's death, Rocket was one of the Renegades who participated in the battle between teams when the Outsider wanted to consolidate them. Rocket was determined to survive by any means necessary, and tried to build a makeshift energy beacon to drain the gamma radiation from the Hulk. However, he was not prepared for the Hulk's angry girlfriend, Firestar, who burned him alive to protect her.

Average Strength... for a raccoon

Retrieved from "https://marvelcomicsfanon.fandom.com/wiki/Subject_89P13_(Earth-89013)?oldid=244629"
Community content is available under CC-BY-SA unless otherwise noted.