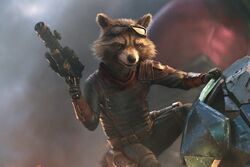 Oh that one there? It's my own design. It's for if things get really hardcore. Or if you wanna blow up moons. Oh! Who wants to go blow up some moons? Just a great idea, off the top of my head.

When the fabled "Halfworld" was settled by humanoid aliens, they began experimenting on the various native species. One such experiment was a raccoon-like creature with above average intelligence named Rocket. After getting cybernetic implants and having his brain enhanced to give him the gift of language, he began planning his escape and vengeance.

During his great escape, he discovered an otter-like creature named Lylla, who had gone through similar experiments. Rocket freed her and together, the two of them made their escape from Halfworld. In order to make a living, they turned to thievery, and eventually Lylla was able to form a stable life for herself on the Celestial space station Knowhere. But Rocket found himself growing bored, and he left Knowhere.

Eventually, Rocket met a Flora colossi named Groot, who he hired to be his personal muscle. Rocket was one of the only people capable of understand Groot, which led to them becoming good friends. Eventually, they found themselves joining a crew alongside the Shi'ar thief Star-Lord and the deranged Dakkamite Drax the Destroyer. They dubbed themselves the Guardians of the Galaxy, as an ironic name so that it would help them get business.

They were eventually hired by the Black Order to apprehend Gamora, the daughter of Thanos. After they found her and she bested them all in combat, Star-Lord and Groot decided it would be best if they protected her from the Black Order. Rocket, however, wanted to bring her in and collect the bounty, which would make them rich, but he was overruled.

After Gamora officially joined the Guardians, they found themselves accepting more and more heroic jobs until they were considered full-blown good samaritans across the galaxy. They even went on to continue accepting more members, and Rocket started to finally feel okay with having people around him. He even found himself making frequent visits to Knowhere in order to maintain a relationship with Lylla.

Average Strength... for a Raccoon

[[Category: In a Relationship with Lylla Characters]]
Retrieved from "https://marvelcomicsfanon.fandom.com/wiki/Subject_89P13_(Earth-101)?oldid=250236"
Community content is available under CC-BY-SA unless otherwise noted.