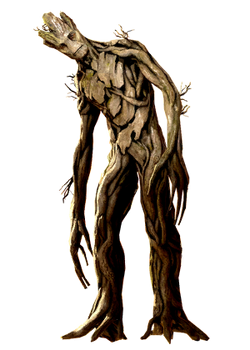 Single
Occupation
Avenger, adventurer
Education
No formal education, trained in combat by the Avengers and Rocket Raccoon.
Origin
Origin
An experiment of life created by HYDRA, initially to make their first superhuman agents, along with his "brother", Rocket Raccoon. After being revived/restored, Subject-401, "Groot", along with Subject-400, "Rocket Raccoon" joined the New Avengers.
Creators

His vocabulary is limited. He literally can only say his own name. That's kinda weird, you know. Considering that his... "brother" is a real tactical genius and weapons expert. It's like that, HYDRA needs a duo of brains and brawns. And because of him, we all must use translator devices...

Subject-401, now known as "Groot", was actually one of the 500 experiments performed by HYDRA in order to make superhuman agents. While they do have Quicksilver as their first superhuman agent, HYDRA began making experiments to make an artificial life-form. A simulation of life, that they can use for their own advantage. Groot was the 401st among the 500 experiments. Groot was intended to be a walking tank, that can use nearby environment for combat effectiveness. Plus, he's programmed to be a silent, obedient agent. Groot was supposed to be only programmed to being only capable of saying "I am Groot" to "inspire fear". However, the 500 experiments were later abandoned after HYDRA perished under the Avengers' actions. As such, Groot was deemed incomplete. Although he, along with his "brother", Subject-400, "Rocket Raccoon" was actually near completion. For months, they're left "rotting" in the HYDRA base where they're kept at.

A Look at the World

Finally, Subject-401 and 400 would later escape from their "imprisonment" and revived. When the Avengers are trying to find members for their New Avengers, they stumbled upon the base where the 500 experiments were kept at. They found out that only "Groot" and "Rocket Raccoon" seemed to be able to be revived, or "activated". When Groot and Rocket were activated, they went on a short rampage before being put down by Juggernaut. They're brought into the place where in the future, it will be known as the Avengers Mansion. Several researches were done of them, and some facts were discovered about them. In particular, due to Groot's limited vocabulary and only Rocket can understand him, Dirk Anger gave the Avengers translator devices to understand Groot.

While Groot has no formal education or whatsoever, he has been trained by the Avengers and Rocket Raccoon to use a type of free-style fighting to use his strength in combat effectively, to it's greatest extent.

Groot is able to lift up to 100 tons. Through size manipulation, he can lift up greater weights, although the limits are unknown.

Groot's wooden body makes him vulnerable towards fire. Although recently, he has been shown to be immune to fire, instead, and takes reduced damage from fire attacks through size manipulation. Also, Groot gets slower as his size increases, making him an easy target. Groot is noted to be not able to comprehend things quickly, too. His vocabulary is also limited, only being able to say "I am Groot", unless someone uses a translator device or a thing like that.

Equipment: None known.
Transportation: The Avengers Quinjet
Weapons: Various weapons that can be formed from his body, mostly melee weapons.

Groot is only a few days old when he joined the New Avengers. Although he has aged to some months now.

Retrieved from "https://marvelcomicsfanon.fandom.com/wiki/Subject-401_(Earth-4045)?oldid=153797"
Community content is available under CC-BY-SA unless otherwise noted.