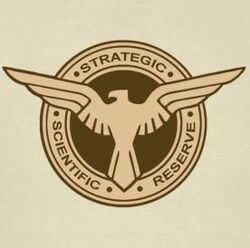 We are going to win this war because we have the best men. And because they're gonna get better. Much...better.

The Strategic Scientific Reserve was formed in 1940 on the orders of President Franklin D. Roosevelt. Although the United States wasn't directly involved in World War II at the time, Roosevelt knew that the situation was only temporary, because Adolf Hitler and his Third Reich were the greatest threat to the free world.

Shortly after, they organized the rescue of Abraham Erskine from Castle Kaufmann, where he was being held by Johann Schmidt, the commanding officer of HYDRA. Phillips sent one of his best agents, Peggy Carter, to secure Erskine's release.

The goal of the Strategic Scientific Reserve was to create an army of super soldiers that could defeat anything the Axis powers had on the battlefield. This led to, Project Rebirth, based on the work of their newest acquisition, Erskine, and the subsequent transformation of Steve Rogers into Captain America.

After Abraham Erskine was killed by Heinz Kruger, the top priority mission of the Strategic Scientific Reserve was to take down HYDRA.

I spoke to the President this morning. As of today, the S.S.R. is being retasked."
"Colonel?"
"We are taking the fight to HYDRA.

In November 1943, several members of the Strategic Scientific Reserve were in Italy. When Steve Rogers discovered that his friend Bucky Barnes was captured by HYDRA, he flew behind enemy lines and led a successful escape of prisoners from the HYDRA factory in Austria.

In the SSR's headquarters in London, Chester Phillips wanted to form a team of soldiers to assist Rogers in taking down HYDRA bases, but he turned down the offer, instead forming the Howling Commandos from the rescued prisoners.

Over the next year, the Howling Commandos progressively managed to destroy most major HYDRA operations, every time postponing Schmidt's planned worldwide offensive. At the beginning of 1945, Schmidt's top scientist Arnim Zola was captured and brought to the SSR's headquarters in London, where he revealed Schmidt's plans.

HYDRA's last base is here. In the Alps. Five hundred feet below the surface."
"So, what are we supposed to do? I mean, it's not like we can just knock on the front door."
"Why not? That's exactly what we're gonna do.

With the intelligence obtained from Zola, the SSR planned an attack on Schimdt's fortress in the Alps. A huge detachment of the US Army assisted the SSR in the attack and the fortress was captured after a relatively short fight. Though Schmidt escaped with the massive aircraft bomber, the Valkyrie, so he could use weapons of mass destruction on American cities, Rogers managed to board the plane and cause its fall into the icy waters of North Atlantic.

These assets are now under the protection of the Strategic Scientific Reserve. They'll be relocated and hidden out of sight, indefinitely, as will you."
"Cut off one head, two more shall grow in its place."
"Then I guess we'll keep cutting them off.

In 1945, the efforts of the Strategic Scientific Reserve were successful. Peggy Carter and a team then took down the last known HYDRA base in Austria, capturing General Werner Reinhardt and the first 0-8-4, the Obelisk. Reinhardt was placed in the SSR facility called the Rat, interrogated, and given a life sentence. HYDRA was destroyed, and the Axis powers defeated.

The SSR facility in London was dismantled and abandoned. However, the SSR's work wasn't finished yet.

The end of the war did not mean the end of the agency. The Strategic Scientific Reserve continued with its activities, because new threats to the USA arose after the war. Howard Stark was accused of selling arms to the enemy during the war, and then he disappeared without a trace. Chief Roger Dooley of the New York City SSR branch was ordered to find Stark.

Eventually, Dooley and his men discovered that the real mastermind behind the theft was Leviathan, the Soviet spy agency formed after World War I. A team of agents led by Jack Thompson and Peggy Carter went to Belarus, where they were assisted by the Howling Commandos in liberating Doctor Ivchenko, a prisoner of Leviathan, whom they brought back to the United States of America.

In 1946, the SSR was working on the Zodiac case. The case was successfully solved by Agent Peggy Carter. Later that year, a new agency, the Strategic Homeland Intervention, Enforcement and Logistics Division, also known as S.H.I.E.L.D., was formed. The SSR was absorbed into S.H.I.E.L.D., becoming one of its subdivions.

This was the SSR facility before S.H.I.E.L.D. was even founded. "SSR" stands for Strategic Scientific Reserve.

--Jemma Simmons about the S.H.I.E.L.D. Academy

After the formation of S.H.I.E.L.D., the Strategic Scientific Reserve became its research division, making weapons and inventions for the organization. One of the SSR's facilities was re-purposed as the S.H.I.E.L.D. Academy of Science and Technology and was used to train gifted young adults to become S.H.I.E.L.D. scientists.

After the Battle of New York, S.H.I.E.L.D. Director Nick Fury took possession of several old SSR bases and furnished them with modern technology. He put only the most trusted agents in charge of those bases, the Koenig brothers among them. After the HYDRA Uprising, those bases became the first facilities of the reorganized S.H.I.E.L.D. led by Phil Coulson. A base called the Playground became the agency's headquarters.

Retrieved from "https://marvelcomicsfanon.fandom.com/wiki/Strategic_Scientific_Reserve_(Earth-1010)?oldid=135502"
Community content is available under CC-BY-SA unless otherwise noted.