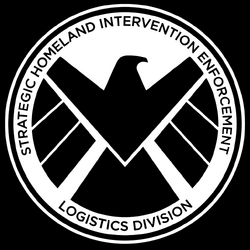 S.H.I.E.L.D. (Strategic Homeland Intervention, Enforcement and Logistics Division) is a combined military, scientific research, and espionage agency with a mandate to protect the populace of the world from threats beyond the scope of standard national security agencies. It was reformed from the remnants of the Strategic Scientific Reserve in the aftermath of World War II, and is made up of personnel from three disciplines: Operations (Ops) is the military, tactical and armed security division; the Science and Technology division (Sci-Tech) provides scientific research and medical support; Communications (Comms) is focused on data analysis and network security.

Founded in the wake of the Allied victory over the Axis powers and HYDRA in World War II and in the memory of the heroic Steve Rogers, Captain America, the organization known as S.H.I.E.L.D. was organized to protect the United States, and later the entire world, from all possible threats. With its advanced weapons and extraordinary agents, S.H.I.E.L.D. was becoming the greatest military power on Earth.

For decades S.H.I.E.L.D. maintained a clandestine watch over the world, until the twenty-first century when they were suddenly confronted with a new age of superhuman threats and were forced to expand again.

Colonel Nick Fury (Jr.), son of one of the founders of S.H.I.E.L.D., who was the retired General Nick Fury (Sr.), together the World Security Council, now took control of S.H.I.E.L.D. in the modern age, who was now dealing with the significant rise in enhanced individuals and dangerous advanced technology.

One of his greatest known actions were to resurrect the Super-Soldier program, commissioning Dr. Bruce Banner to try to recreate the formula that made Captain America. This failed and resulted in the creation of the Hulk, when Banner was exposed to high levels of Gamma Radiation instead of Vita Radiation after injecting the serum onto himself. It was later revealed that the chemical called Oz, which turned Norman Osborn into the insane arch-nemesis of Spider-Man known as the Green Goblin, was also created in hopes of recreating the Super-Soldier formula. Also, the creation of the Sandman and Electro are due to Hammer Industries attempting to recreate the Super-Soldier formula for the organization.

Since the September 11 attacks had occurred, S.H.I.E.L.D. has shown to have developed into a more militaristic side, activating it's new protocol of illegalizing the method of genetic tampering without the authority of the U.S. Government and to hunt down and arrest every rogue and illegal super-soldier, even shutting down every organization (except for the U.S. Military and other U.S. government-runned organizations) that are illegally using the super-soldier program without the legal authority of the U.S. Government, located in America.

During his time as director, Nick Fury sent a team led by Hank Pym to find the crash site of the Valkyrie on Greenland after tracking it's location. Rogers' body was found inside, perfectly preserved in ice. His body was later defrosted and then shipped to S.H.I.E.L.D. Headquarters in New York City, where he later woke up into the modern world of the 21st century.

In further in upholding its agenda on policing post-human threats, the organization maintains ties to a sister organization in Europe, the European Defense Initiative as well as the English-operated S.T.R.I.K.E.

S.H.I.E.L.D. eventually started to deal with alien contact after detecting it's recent presences, but all the problems S.H.I.E.L.D. had to solve eventually led to the formation of the Avengers, a response team that was recruited to save the world during the alien invasion of Earth, known today by many as the Chitauri Invasion.

Hydra Strikes With a Vengeance

Through the actions of Captain America, the world became aware of the fact that S.H.I.E.L.D. was infiltrated and largely controlled by the terrorist organization HYDRA. After the battle during the Ultimate War in which S.H.I.E.L.D.'s primary headquarters, the Triskelion, was heavily damaged (though, later it had been rebuilt), all of S.H.I.E.L.D.'s classified files were dumped on the Internet, and the agency was disavowed by its commanding governments and labeled a terrorist organization.

Many S.H.I.E.L.D. officials were taken into custody and subjected to rigorous questioning. However, despite the massive manhunt on S.H.I.E.L.D.'s agents, a few operatives scattered across the world in most secret bases remained loyal to their oath, saving the most necessary paraphernalia for future use.

But the team most responsible for the survival of S.H.I.E.L.D. was the team of Agent Phil Coulson, who valiantly led his teammates against the forces of Hydra led by the traitors John Garrett and Grant Ward, winning the battle in which Garrett's plan ultimately failed. After that battle, Nick Fury appointed Phil Coulson the new director of S.H.I.E.L.D. and tasked him with rebuilding the agency from scratch.

Now working from the shadows and hunted by almost every army in the world, Coulson used his old team as the core of S.H.I.E.L.D. and recruited mercenaries, former agents, and others to help fill the organization's ranks, while simultaneously continuing the fight against Hydra and other threats as the Afterlife, a once isolated group of Inhumans led by Jiaying, who declared war on the organization. The fight was short and S.H.I.E.L.D. was able to prevent any further damage. After the war, Coulson started a new program of recruiting and training Inhumans for a team to deal with various threats.

In the aftermath of Hive's defeat and the traumatic events of Ultimate War and Civil War, S.H.I.E.L.D. was once again legalized following the signing of the Superhuman Registration Act, but under a new Director, Jeffrey Mace. Daisy Johnson abandoned S.H.I.E.L.D. and became a vigilante known as Quake.

At the same time they had to deal with a new threats, Eli Morrow, who with the knowledge of the mysterious book called the Darkhold, managed to received powerful powers. In order to defeat him, S.H.I.E.L.D. worked together with Johnson and Ghost Rider. After the victory over Morrow, Johnson rejoined the organization. The revelation that Mace was not an Inhuman caused Coulson to return to the possession as the Director de facto, though Mace still proves himself that he was a skillful and worth leader for S.H.I.E.L.D. as well after finally taking down the anti-Inhuman group known as the Watchdogs.

After the events of the Secret Invasion, Norman Osborn then became the leader of S.H.I.E.L.D. by the higher authorities, having to manipulatively convince the entire world of his redemption and transformation as the former villain, Green Goblin, turned into the heroic Iron Patriot, rebranded it into H.A.M.M.E.R. and secretly formed his own dark society in order to control the world in their hands and steal the Avengers name from the team, with the Dark Avengers being publicly introduced as the new representatives of the Earth's mightiest heroes. This idea was thankfully prevented by the reformed incarnation of the Avengers even before it was meant to happen, dismantling H.A.M.M.E.R. and reabsorbing its faction back to S.H.I.E.L.D. once again, returning Jeffrey Mace's position as secret co-directors along with Phil Coulson, which extremely enrages a now-fugitive Osborn and causes him and his Dark Avengers to rely on his back-up plan, the Siege of Asgard.

Having part of the Dark Avengers, Thor's diabolical cyborg clone, Ragnarok conveniently suggested Osborn and his teammates into leading an all-out assault on the city of Asgard, since he knew a secret way to enter the realm. The Ultimates, aided by the forces of S.H.I.E.L.D. and the E.D.I., then led a rebellion against Osborn's schemes, but at the cost of several casualties, including Loki, along with the half of the city's destruction at the hands of Norman Osborn.