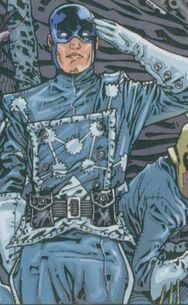 Concept Art.
Add a photo to this gallery

23 years old, Robust, athletic and aristrocratic Steven Rogers, who has originated from a wealthy family is deeply influenced by the impact of the war and decides to volunteer as a soldier in the WW2 in 1941 His parents dissuades of his decision to participate on the war for the dangers that lie out in the battlefields but Steve with his ambition flees to Kansas with his childhood best friend, the feeble and decrepit Bucky Barnes to volunteer in the war. They both are enlisted as soldiers and since U.S.A was did not have a successful assault on Germany`s army squadrons, they needlessly and blindly enlisted soldiers as recruits. During the war in the battlefield in a coup de tat in Japan, Minogosuki, Steve and Barnes had survived through a rambles of bombings and attack on them. But when a  radioactive chemically micromolecular bomb is thrown at Bucky, Steve makes the ultimate sacrifice by taking the bomb and pushing Barnes out of the way, damaging both of them, but Barnes in a minor issue.

Steve falls into coma for the next three months and when he recovers, he discovers his cosmic abilities of generating and manipulating his body into a cosmic figurine which enables him to temporarily fly, take the hit of any bullet of weaponics into him and absorbing the damage of the attack and using that as an energy. But Dr. Abraham Erskine who discovers the great power in him realizes that absorbing this much of energy would kill him in three weeks so he starts formulizing a super soldier serum which was a cancelled program in WWI. He makes Steven use that and regenerate his cosmic body into another one by a revamping engineering machine which turns his body bones into an exoskeleton but thus reverting the powers of his flight but enabling him to shoot shockwaves and screams for a limited energy and also making him reach at the very peak human form, to an alpha superhuman. After discovering these powers, Steve takes the identity and the mascot for U.S.A and becomes Captain America and rages on the war battling to victory. But during a mission to assassinate Red Skull and eliminate him before he launches an atomic nuclear missile, Steve makes the ultimate sacrifice by taking him down into the ice freezing both of them, cryogenically freezing them. 90 years later, S.H.I.E.L.D finds him and the whole thing begins.

Shockwaves, Screamwaves, beams for a limited amounted of energy.

Radioactive molecular manipulation for the explosion.

Bulletproof Spandex Suit out of exofibers.

Molecular Enhanced Radioactive Weapons: Weapons out of radioactive atoms can easily manipulate him.

Outlayered Magnets: Since he has an exoskeleton inside his body, outlayered magnets can trigger the exoskeleton out of him mortally wounding him and will make him a feeble person because of no existence of a spine in his body.

Top of his head: The brain is located there and as he consumes the pain of deriving too much cosmic radioactivity in his body and brain, if someone attacks him on the top of his head, he`ll be fatally wounded. So he wears a circle spotted protection that is an invisible helmet.

Retrieved from "https://marvelcomicsfanon.fandom.com/wiki/Steven_Rogers_(Earth-TRN15879)?oldid=197851"
Community content is available under CC-BY-SA unless otherwise noted.