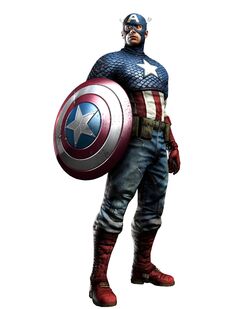 One of Steve's missions as Captain America during World War II was rescueing Natasha Romanoff from the Hand. He was partnered with Logan & Ivan Petrovitch.

Captain America is traditionally seen as the greatest hero of the Marvel Universe. He is a righteous and brave man who always wants to see the good in people. From his origins as a superhero, Cap has always devoted himself to the protection of the weak and the defense of freedom and justice.

Master Martial Artist: Rogers is an expert in hand-to-hand combat being very skilled in multiple martial arts through his training in military combatives and instruction under various private instructors. He mainly utilizes American Boxing, Judo, Akido, and Jutjitsu. However, he has utilized other martial arts including hand techniques in Ninjutsu, Karate, Muay Thai, Escrima, Chin Na, Wing Chun, Northern Shaolin kicking methods, and Wushu with his gymnastics ability creating a style that suits his strengths and enables him to use his knowledge to the best of his ability. Rogers has displayed all types of martial arts techniques from physical combat to chi manipulation. He is considered one of the finest martial artists on Earth.

Master Shieldmanship: His years of training and experience with his unique shield, as well as its physical properties, allow him to accomplish amazing feats with the item. Aside from bashing foes and blocking incoming attacks, he is able to throw it with nearly perfect aim. Rogers can hit multiple targets with the same throw by means of ricochet, and could even achieve a boomerang-like return effect, allowing him to strike enemies from behind or retrieve the shield without objects to ricochet from.

Master Tactician and Strategist: Rogers is an accomplished strategist. He had been widely considered one of, if not the greatest, tacticians on the planet, both on and off the battlefield. He is able to formulate battle strategies and his brilliant tactical sense allows him to alter any strategy to fit the changing need of the situation.

Master Acrobat: His years of training and experience have made him an expert acrobat, gymnast, and aerialist. He often utilizes these talents in combat for both evasive and offensive purposes.

Indomitable Will: Rogers is a very strong-willed person. He is able to overcome most forms of temptation and resist the effects of extreme pain, drugs and toxins to a great extent. Rogers accepts his own mortality, and refuses to rob any sentient creature of its freedom. Rogers is also capable of resisting all forms of mind control; only the strongest willed individuals have a chance of enslaving him.

Professional Sketch Artist: He has great artistic skill which he developed from childhood. Rogers often worked as a freelance illustrator and sketch artist even loaning his skills to the NYPD for a time. He enjoys drawing and does so with his free time.

Expert Marksman: He can throw most projectile weaponry with great aim and is well-versed in the use of firearms, though he prefers not to use them.

Expert Swordsman: Steve is proficient with swords and staffs, but is more comfortable with his shield.

Weapons Proficiency: He does not typically utilize weapons other than his shield, but in desperate situations he wields additional weapons to ensure victory. He is proficient in wielding swords, daggers, throwing knifes, staffs, sticks, tonfa, axes, maces and even firearms.

Multi-lingual: Rogers is fluent in English, German, Russian, Spanish, Japanese, at least some French, and some Italian. He might be lingual in other languages.

He has been known to overhead press 800 lbs, but had also bench-pressed 1,200 lbs and curled 500 lbs. He is cited as having the strength of 10 men and had himself once stated that he has the strength of half a platoon of fighting men (around 10). The average man is capable of lifting his own body weight, around 180 lbs, so, Captain America could be able to lift ten times that weight. He had been referenced at least twice as having preternatural strength. But it seems to say that 1,200 pounds is his limit. Therefore his strength is beyond human ordinary.

Retrieved from "https://marvelcomicsfanon.fandom.com/wiki/Steven_Rogers_(Earth-727)?oldid=171361"
Community content is available under CC-BY-SA unless otherwise noted.