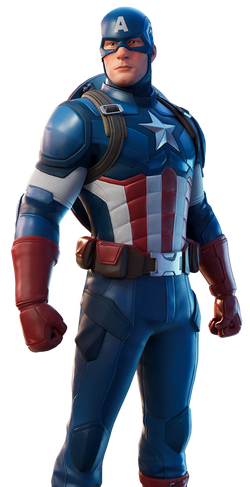 Married
Occupation
Former US Army soldier
Leader of the Avengers
Member of the United Nations
Education
Homeschooled by adoptive father
Origin
Origin
Born sickly and frail as an infant, Steve was imbued with a Super-Soldier serum, where he became superhuman -- having a muscular structure and gaining abilities such as super strength, speed, stamina, and agility, and even decelerated aging.
Place of Birth
Philadelphia, Pennsylvania, USA
Creators

I was given a chance to bring peace to the world and I'm not going to waste it away.

Steven Grant Michael Rogers was born in Philadelphia, Pennsylvania to John and Sarah Rogers in the early 20th century. Both of his biological parents ended up getting killed in a shooting, the young infant Steve being sent to an orphanage. However, he was adopted by Jaeger Kaufman, a skilled scientist and doctor who immigrated from Germany, raising him as if he was his own son. From an early age, Steven suffered from a chronic illness as a result, he had gotten sick constantly and had a frail structure since he was born. Steve was constantly bullied by his peers, getting ridiculed and mainly beaten up by boys older than him, prompting Jaeger to secretly develop a special project that would help Steven with his ailment while he regularly took care of him as he battled with the illness daily.

After the beginning of World War II, Japan attacks Pearl Harbor in Hawaii. The US Army has already enlisted many soldiers into war and Steven, who was now in his 20s had always wanted to fight in the war for his country. But as he tried to enlist himself into the war, he was turned away by the Army because of his frail and sickly state, fearing for his staggering health. The rejection brought Jaeger's attention and he tells Steve that he has been working on a special project while raising him that could help him get enlisted in the army. Taking his father's word, Steve was introduced to Project Soldier, where he meets a team of elite scientists who knows about bis condition and inspired Jaeger to create the project not just to boost him his strength but cure him of the disease. Jaeger and his colleague, Dr. Abraham Erskine performed the project on Steve and it became successful as a result-- Steve's frail body became perfectly muscular and was given incredible abilities such as superhuman strength, enhanced speed, super stamina/agility, not mention curing him of his chronic illness. However, this caught the attention of a Nazi spy, he along with a few others were sent to terminate the project. All of the scientists involved were killed including Dr. Erskine was killed, but Jaeger manages to escape death, and Steve, in his and cured self apprehends the spies.

The Birth of Captain America

Both Steve and Jaeger moved to New York City where World War II was still at its peak. Since the loss of the Project Soldier, Steve has been the only manufactured Super-Soldier in the world and with his determination in serving the country still fresh, Jaeger decided to help train Steve in becoming the hero he wanted to be. With the proper training from former Army soldiers, he was given a red-white-and-blue suit with a vibranium-made shield resembling the American flag. Steve was given the name Captain America by Jaeger which the latter proudly embraced.

Jaeger secretly flies Steve to Europe as World War II was slowly reaching to its end. After his arrival, he led the Allied forces and battled the Nazi German soldiers who have committed horrendous crimes all over Germany. This caught the attention of Red Skull of H.Y.D.R.A., an elite terrorist organization bent on world domination. After the defeat of the Axis Powers and the suicide of Adolf Hitler, Captain America confronted Red Skull, igniting an all-out battle. The leader of H.Y.D.R.A. made his escape on his plane and Steve pursues him, taking their fight in the air. When Red Skull plans to bomb all of the countries including the United States, Captain America upper-hands Red Skull, knocking him off the plane and crashing into the ocean after losing control. But thanks to the Super-Soldier serum imbue in his body, he was frozen in suspended animation, sparing him from being frozen to death.

Rewakening and forming the Avengers

In the modern era, Steve was found by S.H.I.E.L.D. director, Nick Fury and was taken to the Triskellion where he was thawed from his frozen animation. His reaction was indeed pretty hostile since he had been frozen for more than 60 years. However, he was told by Fury and his partner, Phil Coulson that he was a historical figure in America, leading the Allied powers in World War II and 'dying' a hero defeating the H.Y.D.R.A. It took Steve a while to adapt to the modernized world and along the way, he met S.H.I.E.L.D. trainee, Sam Wilson who was a fan of him. They developed an unlikely friendship, but as their bond progressed, Steve begins to fall in love with Sam.

After getting comfortable with the newly-developed environment, Steve fought along S.H.I.E.L.D., fighting minor supervillains and criminals that have terrorized the world until H.Y.D.R.A. leader, Red Skull have resurfaced and has formed a new team to join him in his world domination. Gearing up as Captain America, he, along with his new partner and love interest, Sam who now goes by Falcon leaves S.H.I.E.L.D. to fight Red Skull and along the way, they meet Tony Stark aka Iron Man who was fighting the H.Y.D.R.A. troops. After helping the Stark billionaire, Steve offers Tony to form a new team with him, which the latter who was also a fan of the Captain, accepts the offer. Soon, Steve ends up recruiting heroes of different backgrounds, forming Earth's Mightiest Heroes -- The Avengers with local hero, Peter Parker aka Spider-Man joining the team later on to fight Red Skull

As he started his years in the Avengers being leader of the team along with Iron Man, Steve ends up reuniting with Jaeger who encounters him back in Philadelphia, shocked that the man had used the Super-Soldier serum because he wanted to 'honor' him back when he heard about his sacrifice after the end of World War II. Later on, Steve proposes to Sam, eventually getting married. Their wedding was held at Central Park, with former S.H.I.E.L.D. colleagues and Nick Fury present.

Retrieved from "https://marvelcomicsfanon.fandom.com/wiki/Steven_Rogers_(Earth-7090)?oldid=267834"
Community content is available under CC-BY-SA unless otherwise noted.